I have struggled with anxiety for as long as I can remember.Â  It took me years before I realized what it was and that it was real.Â  My mother also lived with it, but our family did not realize it until after she passed away.Â  It is a condition that can be handled in many ways; however understanding is half the battle.Â  I can usually control my anxiety with deep breathing and prayer, but there is one thing in this world that sends my anxiety to paramount levels:Â  the sound of the monitors in the hospital.
My son Caeleb is in the hospital more often than not as he battles severe Hemophilia A, an inhibitor, an allergy to factor VIII and a debilitating fear of needles.Â  When he is hospitalized it is usually because we are not able to control his pain at home, which leads to IV pain medications.Â  The sedative of those strong opioids leads to monitors to watch his breathing.Â  As he sleeps, the monitors will often start to beep as his respirations sink.Â  His respiration rate is not usually extremely low, but the sound of that alarm and what it means just completely makes my heart stop.
Recently, a new medication made his heart rate increase. Â The familiar beeping started and I could not stop watching the monitor.Â  I knew there was nothing I could do, but I had to see what was going on.Â  I needed that sound to stop.Â  I needed to know my son was okay.Â  My anxiety was suffocating me and my instinct was to escape the sound, but when your child hurts or is in trouble, you can’t leave.Â 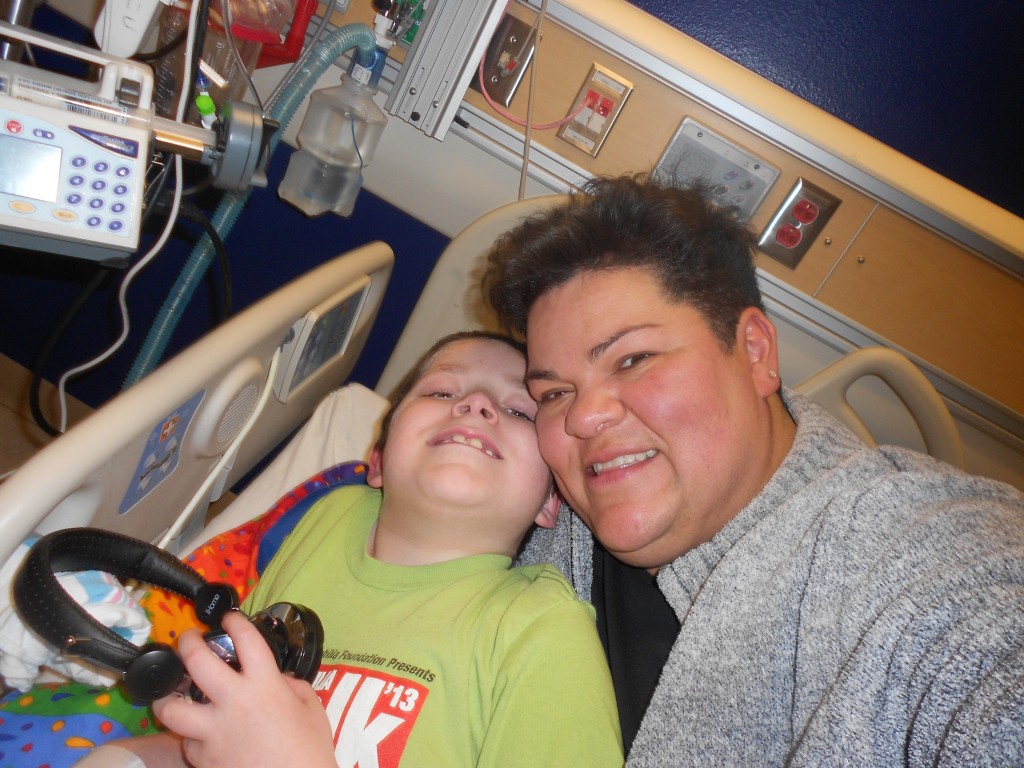 I am the kind of person who stays pretty calm during a crisis, especially with my boys.Â  I don’t think I transfer my anxiety to them because of how I focus on the situation. However, when someone you love is becoming anxious, concerned, and is on heightened alert, it is hard to not feel it despite their best efforts.Â  I truly believe one of the most important things you can do for your child during an infusion, a procedure or any stressful situation is to stay as calm as possible and focus good energy on them.Â  But when the beeps of the monitors begin, my heart skips a beat because I immediately start thinking the worst.
My fear of the monitor comes from a particular incident in the hospital a couple of years ago.Â  Caeleb was on pain meds for an incredibly painful bleed and he could not calm down.Â  The doctors gave him a second medication to help reduce his stress levels and the two did not mix.Â  The nurses could not wake him up.Â  It seemed as if every nurse on the floor was in his room.Â  His respirations were low, the monitor was going off, it was one in the morning and every light was on.Â  The nurses and I were trying to stir my sweet boy.Â  I was out of my mind!Â  I had never thought about losing my son…until that night.Â  The team had to use rescue medications to reverse the effects of everything in his system.Â  It was awful.Â  He flew out of bed from that deep state in excruciating pain, and I sobbed as I grabbed him and held on like I’ve never held him before.
I wish that night would leave my memory, but it hasn’t.Â  Maybe it’s good that it stays with me so that I don’t forget how fast things can happen when managing a bleeding disorder and, just maybe, I won’t get complacent about his treatment.Â  His battles are not typical of someone with a bleeding disorder, but I know there are others out there struggling just like my Caeleb.
Unfortunately, I think there are more “Caeleb’s” out there than many of us realize.Â  When children with inhibitors endure bleeds that are difficult to control, it is frightening.Â  These are the times when I start to imagine the worst. Most recently, for us, it was a terrible knee bleed. And now, despite how much it has healed, the knee looks completely different than the other.Â  It is obvious that damage occurred and may never be reversed. All the anxiety I live with turns into a deep sorrow.Â  My sorrow is for my son being physically limited when he is only seven years old!Â  He won’t ever really be able to run with sheer abandon.Â  He will always be worried about protecting his knee. When I start that kind of thinking, I try to remind myself that today is what matters most.
Medications help my anxiety, but I don’t want to rely on that quick fix.Â  I am in the process of finding a good counselor to help me with my struggles and am a big believer that the combination of therapy and medications can work.
It’s crazy, but I thought that the longer we were on this hemophilia journey, the easier it would get. Â Â Well, it hasn’t for us.Â  My hope and prayer is that many of you are on this bleeding disorder journey with little disruption and heartache.Â  Everyone has a journey, some more difficult than others, but each of our journeys is important and not “more than” or “less than each other’s.Â  Comparing journeys is not important, but sharing stories is vital. Just talking about my journey has helped me learn to cope with my anxiety.
Cazandra lives with her husband, Joe, and 17 Â year old son, Julian, and 7 year old son, Caeleb, in New Mexico.