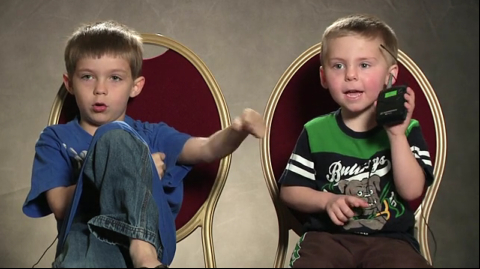 Matt and Anna Landseadel knew little about hemophilia when they chose to bring six-month-old Chris into their home. “All I heard was ‘Six-month-old baby,'” Anna says with a smile, explaining how they came about fostering a child with severe hemophilia A. Chris, now seven, has since been adopted into the Landseadel family, along with his half-brother, Xander, a four-year-old who also has hemophilia.

Now the whole family are experts in hemophilia, especially the two who live with it. “If you’re missing a piece in your [blood] you get sticked with a needle in the arm and it makes it heal,” Chris explains. “If you get scraped or something and it makes it bleed you’ll bleed for a long time till you get factor.”

The boys get their factor, a clotting medication, three times a week, sitting on the kitchen table. “Xander likes to help,” says Anna. “He will take the chloraprep and he will wipe off his port and he’ll push the factor in. I won’t let him put the needle in but he can do every other step.”

“Our kids have known nothing but hemophilia throughout their life, so it’s normal,” Anna says.