The Wilkes Family Thanks ObamaCare 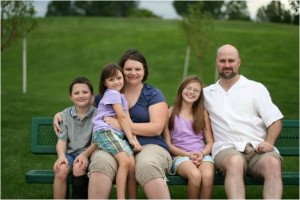 My son Thomas was born in 2003. After his circumcision, he continued to bleed. Within a day, my husband Nathan and I were told that our newborn son had severe hemophilia, a genetic blood clotting disorder. A local hematologist was at our bedside within 30 minutes of us getting the call. She was there to comfort us and talk to us about what living with hemophilia would be like. Her first question was, “Do you have good insurance?”

Nathan replied, “yes, we have great insurance. I work in a highly competitive telecommunications industry and my employer has worked diligently to ensure we have great benefits so we can attract the best people.” The hematologist went on to explain that hemophilia is one of the most expensive chronic conditions a person can have.

Armed with that knowledge, we monitored our insurance, just as we were learning how to live with hemophilia. In early infancy, though, Thomas developed a resistance to the expensive medication he used to control bleeding. This meant switching to another drug that, at the time, was nearly $1,500 a dose and had to be used every 2 hours to stop bleeding into his muscles and joints.

During that time our insurance plan stayed the same. However, the claims were more frequent and certainly more costly. Thomas was on target to have $750,000 worth of claims in his first 18 months of life. In late 2005, Nathan attended his open enrollment meeting at work. He called shortly afterward and said, “The sand is running out of the hourglass. They are imposing a $1 million dollar lifetime cap.” Pregnant with our third child, I strapped our two toddlers into the car, drove to his office and sat in the parking lot with Nathan, crying for hours. My son’s life was at stake and the insurance company had put a price tag on his life.

We began to research our options for additional insurance coverage for Thomas and found our options to be threadbare. Nathan could leave his employer and find a new job with better benefits, but it would only be a matter of time before that employee plan was hit with a lifetime cap too. I could return to the workforce, put the children in daycare and hope for good benefits, but that wasn’t an option because Thomas was very ill during that period and required almost weekly, if not daily, trips to the hemophilia clinic to be seen.

Social workers suggested Nathan and I divorce so that I could be an unemployed single mother whose income would qualify the children for Medicaid. But that option left me without insurance. We could apply for a disability waiver for Medicaid for Thomas, but even if he did get approved, there was a 5-6 year waiting period for the benefits to begin. We could maximize the employee plan and then put Thomas on CoverColorado, the insurance offered by the state for those with chronic illnesses, but it too had a $1 million dollar cap. Eventually, when the first plan ran out, that’s what we did. We paid for 2 insurance plans for over a year while we set up our own small business, and hit the limit on the CoverColorado plan as well. With 2 employees we could purchase insurance through an insurance pool of small businesses. However, we still faced a $6 million dollar limit.

When President Obama began negotiations for the Affordable Care Act, we were cautiously optimistic. My family has since had the pleasure of meeting the President personally and being in the community advocating for this historical piece of legislation. When ACA passed, I told Nathan, “This is the civil rights moment for those with chronic illness. No longer can they be discriminated against because they have pre-existing conditions or have limits placed on their care.” I cried again the night the vote passed in the Senate, but this cry was one of relief – I knew that my precious little boy would be afforded access to the care he so richly deserves.

While there is no cure for hemophilia, I have a cure in ACA for the protections it provides. Mothers always protect their children and I say “Thanks Obamacare” for helping this mother protect her child.