1984: AIDS Continues to Spread Through the Hemophilia Community 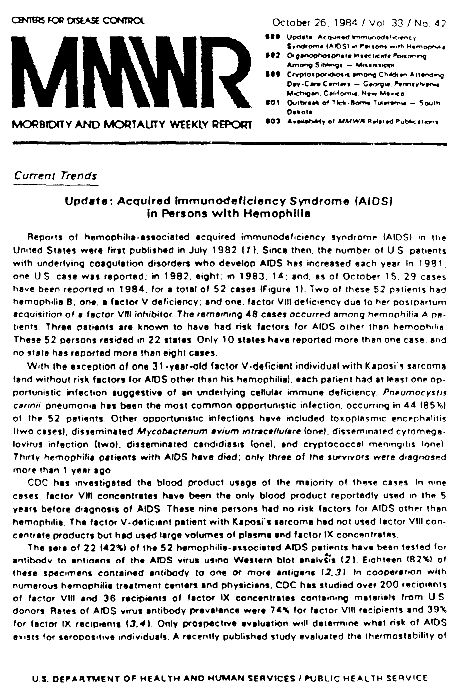 Reports of hemophilia-associated acquired immunodeficiency syndrome (AIDS) in the United States were first published in July 1982 (1). Since then, the number of U.S. patients with underlying coagulation disorders who develop AIDS has increased each year. In 1981, one U.S. case was reported; in 1982, eight; in 1983, 14; and, as of October 15, 29 cases have been reported in 1984, for a total of 52 cases (Figure 1). Two of these 52 patients had hemophilia B; one, a factor V deficiency; and one, factor VIII deficiency due to her postpartum acquisition of a factor VIII inhibitor. The remaining 48 cases occurred among hemophilia A patients. Three patients are known to have had risk factors for AIDS other than hemophilia. These 52 persons resided in 22 states. Only 10 states have reported more than one case, and no state has reported more than eight cases.

CDC has investigated the blood product usage of the majority of these cases. In nine cases, factor VIII concentrates have been the only blood product reportedly used in the 5 years before diagnosis of AIDS. These nine persons had no risk factors for AIDS other than hemophilia. The factor V-deficient patient with Kaposi’s sarcoma had not used factor VIII concentrate products but had used large volumes of plasma and factor IX concentrates.

The sera of 22 (42%) of the 52 hemophilia-associated AIDS patients have been tested for antibody to antigens of the AIDS virus using Western blot analysis (2). Eighteen (82%) of these specimens contained antibody to one or more antigens (2,3). In cooperation with numerous hemophilia treatment centers and physicians, CDC has studied over 200 recipients of factor VIII and 36 recipients of factor IX concentrates containing materials from U.S. donors. Rates of AIDS virus antibody prevalence were 74% for factor VIII recipients and 39% for factor IX recipients (3,4). Only prospective evaluation will determine what risk of AIDS exists for seropositive individuals. A recently published study evaluated the thermostability of murine retroviruses inocculated into factor concentrates, using a cell transformation assay (5). After 48 hours at 68 C (154.4 F), viral titers dropped from 10((8)) to two infectious particles/ml. In studies done at CDC, in cooperation with Cutter Laboratories, AIDS virus was added to factor VIII concentrate (virus titer 10((5))) and the factor was lyophilized and heated to 68 C (154.4 F). The residual virus titer was determined by an infectivity assay (6). Virus was undetectable after 24 hours of heat treatment, the shortest time period examined. Reported by P Levine, MD, Medical Director, National Hemophilia Foundation, New York City; Div of Host Factors, Center for Infectious Diseases, CDC.

Editorial Note: The possibility of blood or blood products being vehicles for AIDS transmission to hemophilia patients has been supported by the finding of risk of acquisition of AIDS for intravenous drug abusers (7) and, subsequently, by reports of transfusion-associated AIDS cases (8). The mainstays of therapy for the hemorrhagic phenomena of hemophilia are cryoprecipitate, fresh frozen plasma, and plasma factor preparations; these have been associated with the transmission of several known viral agents, including cytomegalovirus, hepatitis B virus, and the virus(es) of non-A, non-B hepatitis (9). While many U.S. hemophilia-associated AIDS patients have received blood products other than factor concentrates in the 5 years preceding their AIDS diagnosis, the occurrence of nine cases with no known risk factor or exposure other than the use of factor VIII preparations implicates these products as potential vehicles of AIDS transmission.

The Medical and Scientific Advisory Council (MASAC) of the National Hemophilia Foundation (NHF) has recently issued revised recommendations for the therapy of hemophilia (10). To physicians treating patients with hemophilia, they recommend that (1) cryoprecipitate be used in factor VIII-deficient newborn infants and children under 4 years of age and in newly identified patients never treated with factor VIII concentrates; (2) fresh frozen plasma be used in factor IX-deficient patients in the same categories; and (3) desmopressin (DDAVP) be used whenever possible in patients with mild or moderate hemophilia A. The majority of hemophilia patients do not fit in categories (1) through (3). For these patients, MASAC recommends that, “because heat-treated products appear to have no increase in untoward effects attributable to the heat treatment, treaters using coagulation factor concentrates should strongly consider changing to heat-treated products with the understanding that protection against AIDS is yet to be proven.” They also recommend that all elective surgical procedures for hemophilia patients be evaluated with respect to possible advantages and disadvantages of surgical delays.

Although the total number of hemophilia patients who have thus far developed clinical manifestations of AIDS is small relative to other AIDS risk groups, incidence rates for this group are high (3.6 cases/1,000 hemophilia A patients and 0.6/1,000 hemophilia B patients). Continued surveillance is important. Physicians diagnosing opportunistic infections or unusual neoplasms in hemophilia patients who have not received antecedent immunosuppressive therapy are requested to report these findings to local or state health departments and to CDC.

In March 1983, the U.S. Public Health Service recommended that members of groups at increased risk of acquiring AIDS should refrain from donating plasma and/or blood (11). A specific serologic test will soon become available for screening purposes, and thus a safer factor concentrate product should result. The preliminary evidence concerning the effects of heat-treatment on the viability of the AIDS virus is strongly supportive of the usefulness of heat-treatment in reducing the potential for transmission of the AIDS virus in factor concentrate products and suggest that the use of nonheat-treated factor concentrates should be limited. CDC and NHF will continue to study the effects of heat-treated factor on the immune status of patients with hemophilia.