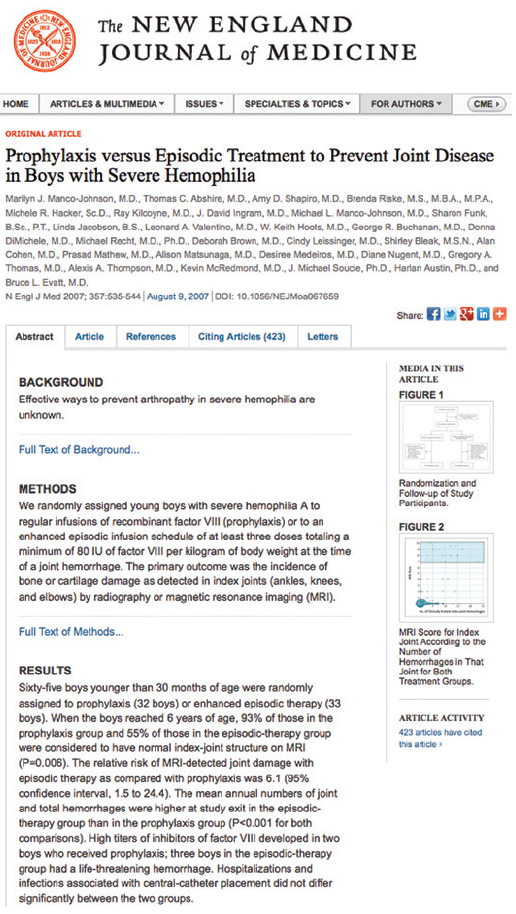 Before the development of cryoprecipitate, a plasma fraction that contains concentrated factor VIII, boys with severe hemophilia A had a diminished life expectancy.Â These children are at risk for many types of hemorrhages, but the predominant source of chronic coexisting disease is crippling, painful arthritis due to hemarthrosis.Â Small trials were conducted in the 1960s to determine whether routine administration of factor VIII concentrate was effective as prophylaxis against hemophilic arthropathy.Â Clinically effective prophylactic schedules were developed empirically, without the benefit of data from controlled trials,Â and many clinicians began to recommend prophylaxis with factor VIII.

In the 1980s, when it was discovered that plasma-derived factor VIII concentrates were contaminated by human immunodeficiency and hepatitis viruses, the use of prophylaxis was severely curtailed.Â In 1992, approval of the first recombinant factor VIII molecule for replacement therapy in the United States allowed for safe prophylaxis in patients with hemophilia.Â Petrini and colleagues reported the prevention of hemophilic arthropathy when prophylaxis was initiated before patients reached 2 years of age.Â Aledort and others reported that prophylaxis slowed the progression of established joint damage.Â Nevertheless, questions remained as to when prophylaxis should begin, what dose of recombinant factor VIII should be administered, and how long prophylaxis should be provided. An important question that could be answered by a clinical trial was whether prophylaxis prevents joint hemorrhage and damage.