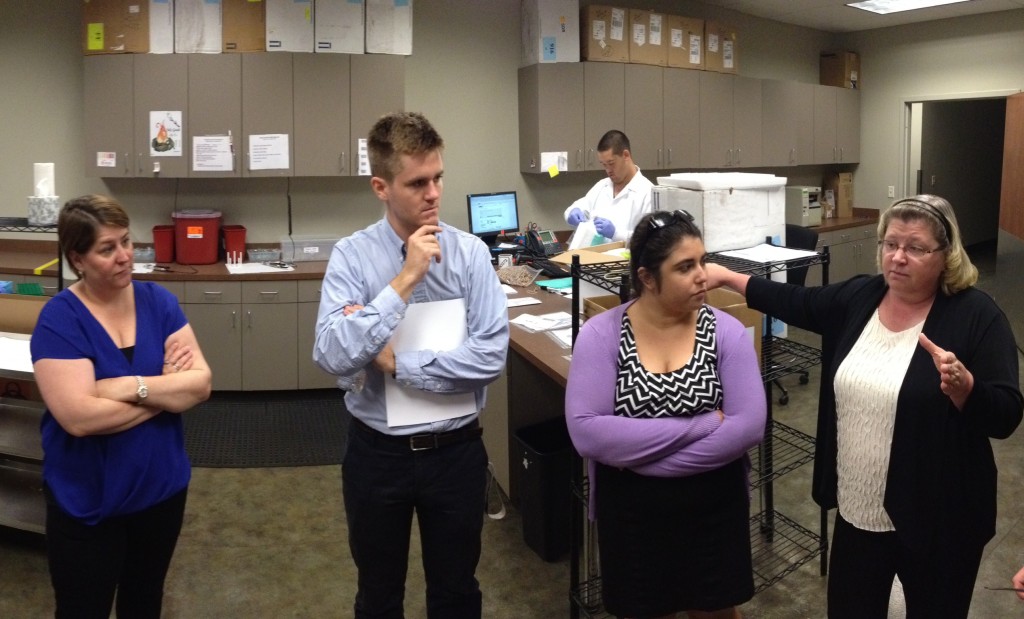 1) Was this your first time visiting a plasma center? What did you expect it to be like?

Lewis: This was my first time visiting a plasma collection center. I think I had a pre-conceived image of plasma centers as existing exclusively in run-down urban areas. I envisioned a storefront with few or no windows and a small sign on the door. I expected it to look something like a doctor’s office or hospital clinic, complete with a waiting room and reception window, and a hallway lined with closed doors.

Maria: Yes, I expected it to be much like a large blood donation center.

Lewis: The center was located in a huge suburban shopping plaza. We actually had a pretty hard time finding it as the collection center was on the back side of the plaza. The collection center had a large professional sign above the door, with glass doors and many windows. Inside, the center had an open layout. There were no floor to ceiling walls separating the waiting area from where the plasma collection takes place. The only secluded areas were for medical evaluations. The collection area was a wide open space with “beds” lined against the walls. The collection beds were kind of like dentist chairs next to plasmapheresis machines that contain the pumps necessary to extract the plasma and replace red blood cells. In the rear of the facility was a packing and processing area to ship out plasma, including two walk-in freezer rooms.

Maria: It was pretty much what I expected, it looked a lot like a blood donation center. There were different stations and people would move through the process to make sure that they could donate plasma safely.Â 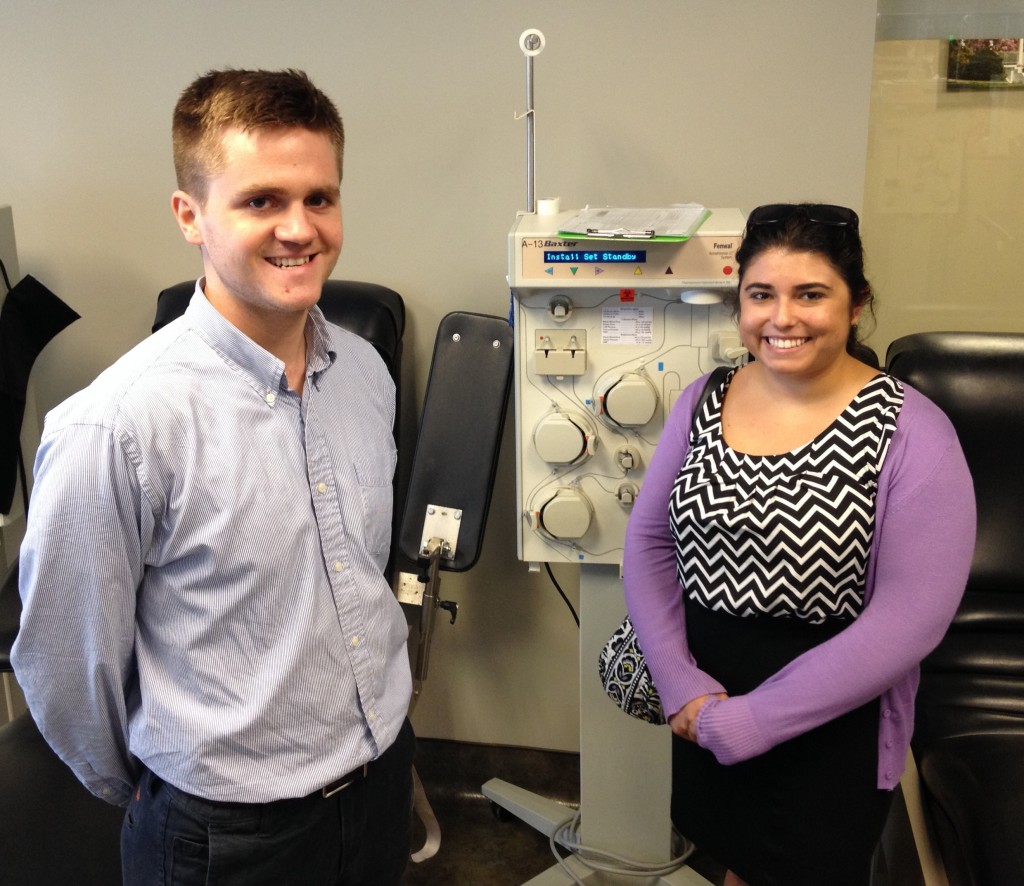 3) What surprised you the most?

Lewis: The open layout of the facility surprised and impressed me. I believe there is a strong correlation between design and company culture, so open floor plans and big windows could be reflective of a transparency and openness.

Maria: I was most surprised with how long the whole process took. It takes between two and three hours to donate plasma. I was also surprised by how many times a person donates plasma. They are allowed to donate two times a week. It was nice to hear that people would take that much time out of the week to help others.

4) What are three things that you learned the most during your visit?

Lewis: My visit taught me just how high the standards are for plasma collection. Government regulation is very extensive, but the industry goes above and beyond these regulations with IQPP (International Quality Plasma Program) and other voluntary agreements. I also learned that the demographic involved in paid plasma donation is highly diverse, I personally saw a huge range of ages and backgrounds from college students to retired people.

Maria:Â During my visit there I learned about the process that is required to donate plasma, I learned about the necessary regulations for the facility and I learned about the transportation process. When someone goes to donate plasma they must go through a physical and many other tests to make sure they are a perfect candidate. If a donor does not return within six months, they are treated as new patients and must go through the initial tests again. I also learned about what is necessary to store plasma in a facility. While we were there, we had the chance to go into the large freezers where they keep plasma. These freezers run on generators so if the power goes out, the plasma is kept safe.

Plasma centers are located on their own power grid so if the neighborhood has a power outage, the plasma center remains unaffected. Finally, I learned about the transportation process and the many checks and balances required. Each unit of plasma must be checked when leaving the center and checked again when it reaches the destination. The plasma is moved in huge freezer trucks and if the shipment is any way delayed during the process the plasma is thrown out. There are also systems to track the location of each truck. It was interesting to learn about the life cycle of donated plasma. There are so many places where problems could arise but the center is prepared for numerous bumps in the road. If the plasma does not pass all of these steps, they do not use that batch. 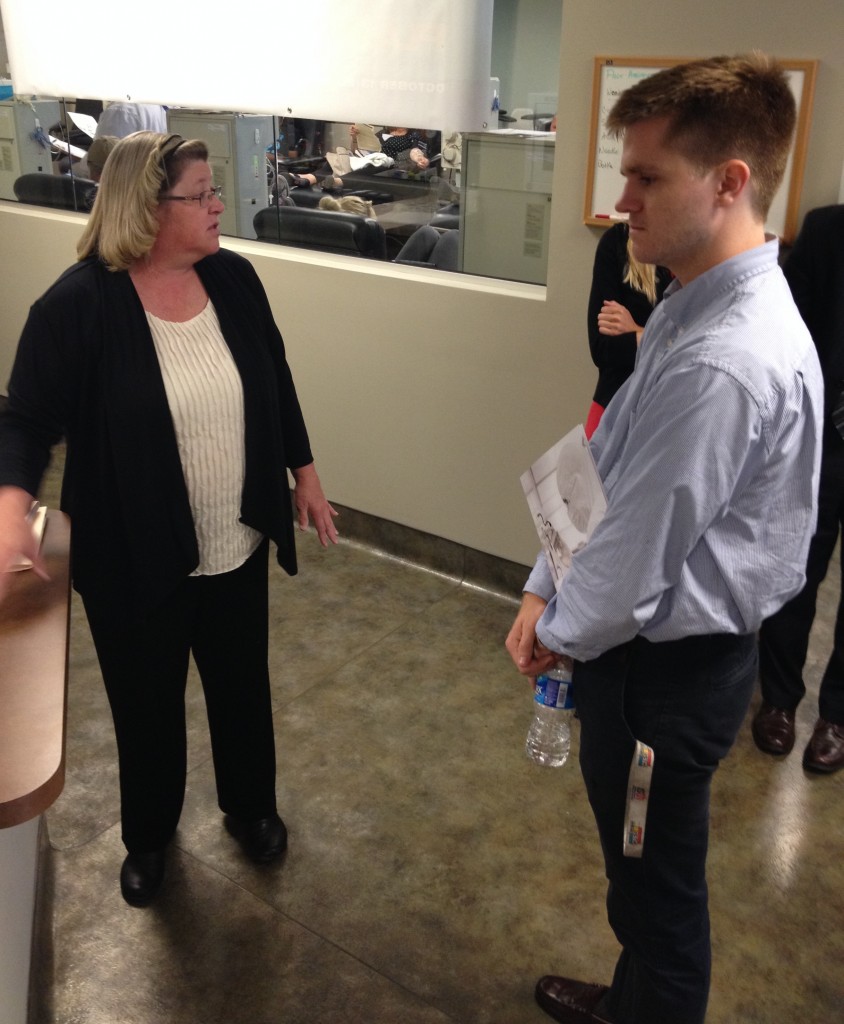 Lewis: The staff at the collection center was incredibly friendly and professional. The manager who gave our tour was very informative and happy to take the time to explain anything we had questions about. I would encourage anyone involved in the bleeding disorders community to do their own research on plasma product manufacturing, as there is an ongoing debate in the international medical community regarding the safety and efficacy of plasma versus recombinant products. Perhaps you could organize an event with your chapter to take a tour of your nearest plasma collection facility!

Maria: I really enjoyed taking the tour of the Plasma Center. I was able to learn so much about the unique process of collecting plasma. I did not realize just how particular this procedure was and it was fascinating to learn about the starting point for plasma based products.