An Inhibitor on the High Seas 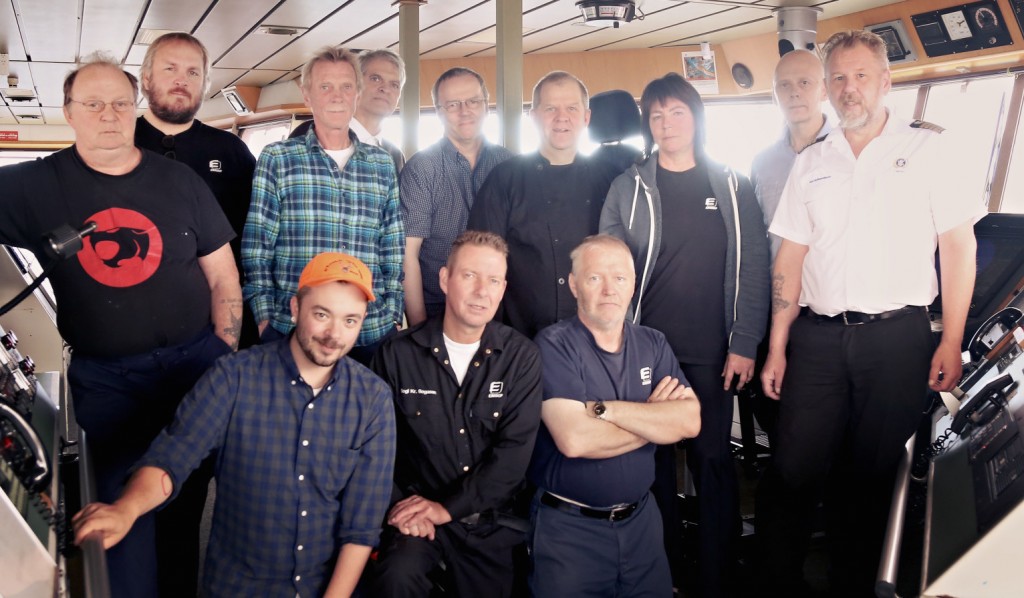 Justin Levesque (pictured in the orange hat), poses with the crew aboard a ship bound for Iceland

Justin Levesque has severe hemophilia with an inhibitor. Justin recently had an opportunity of a lifetime when he spent nine days aboard a ship to Iceland as part of an art project that he developed. In this Q & A, Justin explains this experience and how having a bleeding disorder has helped to make him into who he is today.

What is your involvement in the bleeding disorders community?

I serve on the Board of Directors for the Hemophilia Alliance of Maine and created a group of programs called FOLX that celebrates creative success in the bleeding disorders community. Within FOLX, I’ve organized an annual exhibition of community artworks called Blood Work and another series called Art Factor. I also work as a community advocate for a specialty pharmacy.

You recently took a trip to Iceland. What was it all about?

I’ve had a long-standing obsession with Iceland, particularly the musician BjĂ¶rk. I had the chance to finally visit back in May 2014 but things got interesting after I got back home to Portland, Maine. I noticed blue shipping containers with the word “Eimskip” stacked along the working waterfront. The same blue shipping containers I had just seen in Iceland. It was like Iceland had followed me home.

I quickly learned Eimskip was an Icelandic shipping company and they had recently made Portland their North American headquarters. To put it somewhat simply, I then conceived a project that sought to explore why these containers were here, how they got here, and the economic impact of this development on Maine. With a grant from the Maine Arts Commission, I was able to propose a nine-day artist residency aboard one of Eimskip’s container ships as it sailed from Portland, ME to Reykjavik (the capital of Iceland). So in September 2015, I boarded a ship named MV Selfoss and documented the experience both in photography and in a podcast that features interviews with the ship’s officers and crew.

How was managing your bleeding disorder in a different country (and on a boat)?

Having severe hemophilia A with an inhibitor already has its everyday challenges without factoring in international travel situations much less being on a ship in the middle of the ocean. But I knew that if I listened to my body and followed a strict prophy regimen, I’d be able to handle it. I was already following a daily infusion prophy schedule using a bypassing agent and on the ship, I’d additionally infuse on the days I thought I needed to.

I also made a conscious decision to always be mindful of the level of risk involved in a situation. For instance, at one point a member of the crew brought me down into the hull of the ship to demonstrate how they routinely check the containers. The only way into the hull is a hatch with a ladder going straight down. I knew I could handle one set of ladders. But I found out there were more than three sets needed for the crewmember to complete their job. Rather than risk an elbow bleed, I just let my guide know I’d be photographing for a while where I already was and opted out of the rest.

What is one thing you learned about yourself while on the trip?

I learned I apparently don’t get seasick which was a huge plus! But kidding aside, I rediscovered confidence in myself that had been previously weathered by the development of my inhibitor. And, for the time being anyway, have found a subject (outside of bleeding disorders) to make work about that’s both deeply personal and relevant to issues I find important.

Has your bleeding disorder helped to shape your career?

Growing up, I knew myself to have a fundamentally different experience of the world from my peers. Embracing that difference for its matter of fact truth fostered an ability to approach problems or ideas creatively. Having a bleeding disorder is how I grew to love photography instead of football. And I’m cool with that.

Justin LevesqueÂ specializes in the critical analysis of images and their impact on social norms & community expectations. He lives in Portland, Maine, and runs his own design studio Shop Geometry.Â Heâ€™s volunteered as a camp counselor at NEHA Family Camp for 5 years, mentors LGBTQ youth, and now serves as Creative Director for The Hemophilia Alliance of Maine.