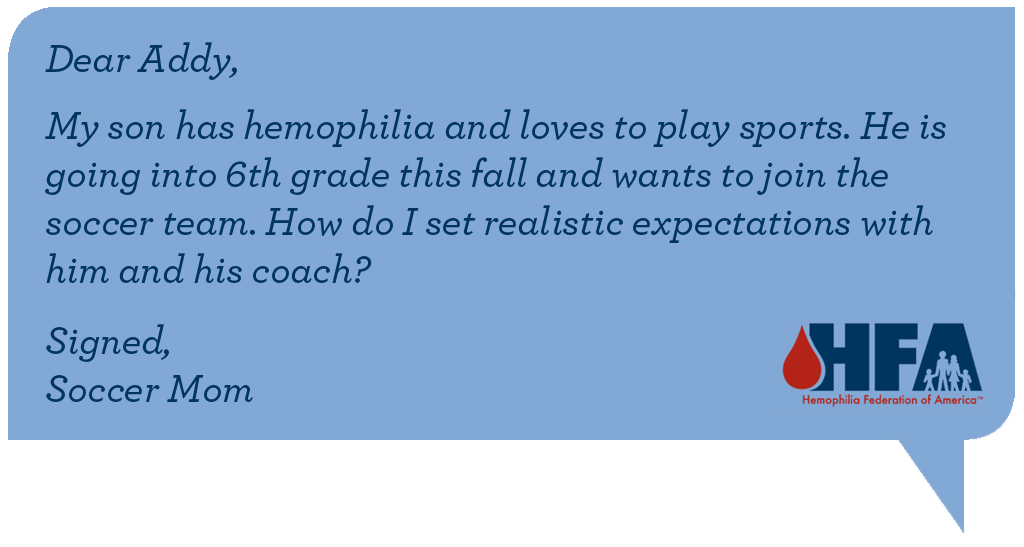 My son has hemophilia and loves to play sports. He is going into 6th grade this fall and wants to join the soccer team. How do I set realistic expectations with him and his coach?

You are not alone in your concerns â€“ this is a common question from parents in the bleeding disorders community. Encouraging your son, while advocating for his safety, is important. Here are ways to set expectations with your son and his coach:

Playing sports is a good opportunity for kids with bleeding disorders to build independence and advocacy skills. Encourage your son to have fun and speak up about any pain or concerns he has while playing sports. Even the toughest athletes take breaks when they are not feeling well so they donâ€™t make the injury worse!

Have a question? Click HERE. Your name will be changed in the response.

HFA frequently receives questions from the bleeding disorders community related to advocacy issues. The questions often impact the entire community. In an effort to reach the largest audience possible with our responses to these widely applicable questions, HFA developed â€śDear Addy.â€ť Questions submitted to this column are edited in order to protect privacy and should be considered educational only, not individual guidance.