Last week, Alexandra and Catherine had the opportunity to tour Grifolsâ€™ plasma collection center in Frederick, Md. Centers like this collect plasma from donors and returns the red blood cells to the donor. The plasma that is collected then undergoes several levels of strict testing and is pooled and parted out to create many different therapy products, which includes plasma protein therapies for individuals with a bleeding disorder.

In this blog post, Alexandra and Catherine will discuss what they thought about this facility and how these treatments help the bleeding disorders community. 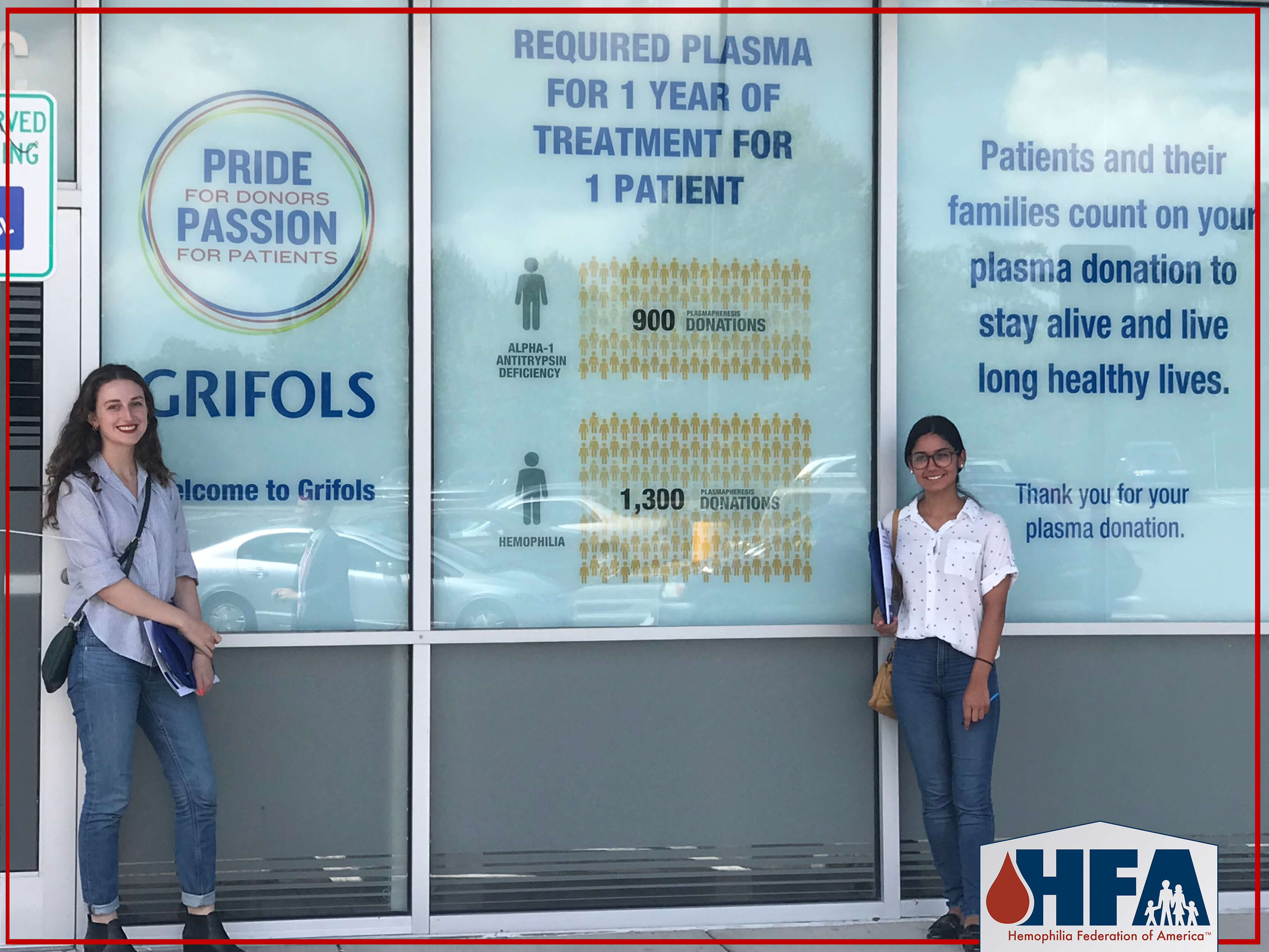 Alexandra: On July 20, I had the opportunity to visit a plasma center for the first time! I did not know what to expect. I was quite nervous, however, because I tend to get groggy when I see blood.

Catherine: Though I have walked by them before, this was my first time being inside a plasma center. Before the tour, I did not have a clear understanding of what the inside operations were like. I had an image in my head of a factory where donations would be processed. It turns out that such a facility is a part of the chain of turning plasma into medicines, but not the first step.

Alexandra: The plasma center was a great experience. As a member of the bleeding disorders community, I was able to see how plasma is collected to make medication that save the lives of so many individuals with rare diseases. When we first arrived, we were greeted by individuals who work in the corporate side of the plasma company, Grifols. We were provided with materials to better understand the purpose of the centers, in addition to a video that clearly laid out the foundations of the company. After receiving this information, we had time to ask questions before getting a more tangible experience of the center. Following this introduction, we toured the entire center. We learned the process from when a new donor comes in, to how plasma is stored in a -35 degrees freezer.

Catherine: I should not have been surprised to find out that the plasma center shares much in common with a doctorâ€™s office. The facility was very clean and the staff members took great care in focusing on their tasks. Just inside the front door is an area where donors can register and fill out questionnaires to ensure their eligibility to donate. Beyond this waiting area is a suite of plasmapheresis machines and reclining chairs where people rest while donating. Along the hall, there are private examination rooms where all donors undergo a thorough physical in order to be approved for donation. We were also taken into the room where samples are taken for testing and donations are labeled with identification numbers before being stored in a walk-in freezer.

Catherine: When we sat down to talk with the public relations manager, we learned about the steps involved in taking donated plasma and turning it into plasma-derived medicines. I was surprised to learn that a variety of proteins and antibodies can be extracted from a single donation. Using specific reagents and temperature control methods, the plasma can be separated into its constituent parts. This means that the company can make the most of each donation.

Alexandra: I left the center with a better understanding of how valuable and important plasma donations are for our community. Prior to visiting the center, I was aware that individuals with rare diseases like hemophilia and von Willebrand disease require medicine made with human plasma. However, after seeing donors giving their time, energy, and plasma to better the lives of others, allowed me to gain a greater appreciation of donors and donations.

Catherine: Plasma donation calls for high attention to detail at every stage. From the moment a donor walks in the door to the patient who uses the plasma-derived therapy, ensuring safety is the highest priority. The bleeding disorders community suffered a tremendous loss during the AIDs crisis when many died after using blood products that contained the Human Immunodeficiency Virus (HIV). Thorough screening, close control of donations, and sterilization of the plasma-derived therapies help to make sure that crises like this do not happen again.

Alexandra:Â I was happy to see the appreciation of the staff at the center for the donors. They stressed how important these donors are to treat individuals with rare diseases.

Catherine: I wasnâ€™t sure how to feel about seeing people giving their donation. It is a very intimate moment- seeing someone giving this vital part of themselves so that others may benefit. I am grateful that there are people out there who are willing to go through the process of sitting for around an hour while a plasmapheresis machine separates out the fluid component of the blood and returns to them the blood cells. Without the donorsâ€™ generosity, it would likely not be possible for people who use plasma-derived therapies to live a normal life.