A New Day Has Come

I never thought this day would comeâ€¦.

When Myles was first diagnosed with hemophilia A, I knew we had a long road ahead of us. Doctor appointments and worrying about safety both inside and outside of school, could always be scary. However, the scariest was the responsibility of making sure Myles always had the correct medication and dosage but also administering his factor safely.

It was a struggle from the beginning and throughout his first six years. We started regular prophy three days a week, in which each visit would consist of a nurse to administer factor and both a nurse and me to hold Myles.Â Our HTC, Mary Gooley Hemophilia Center staff, and my primary concern for Myles was safety first. 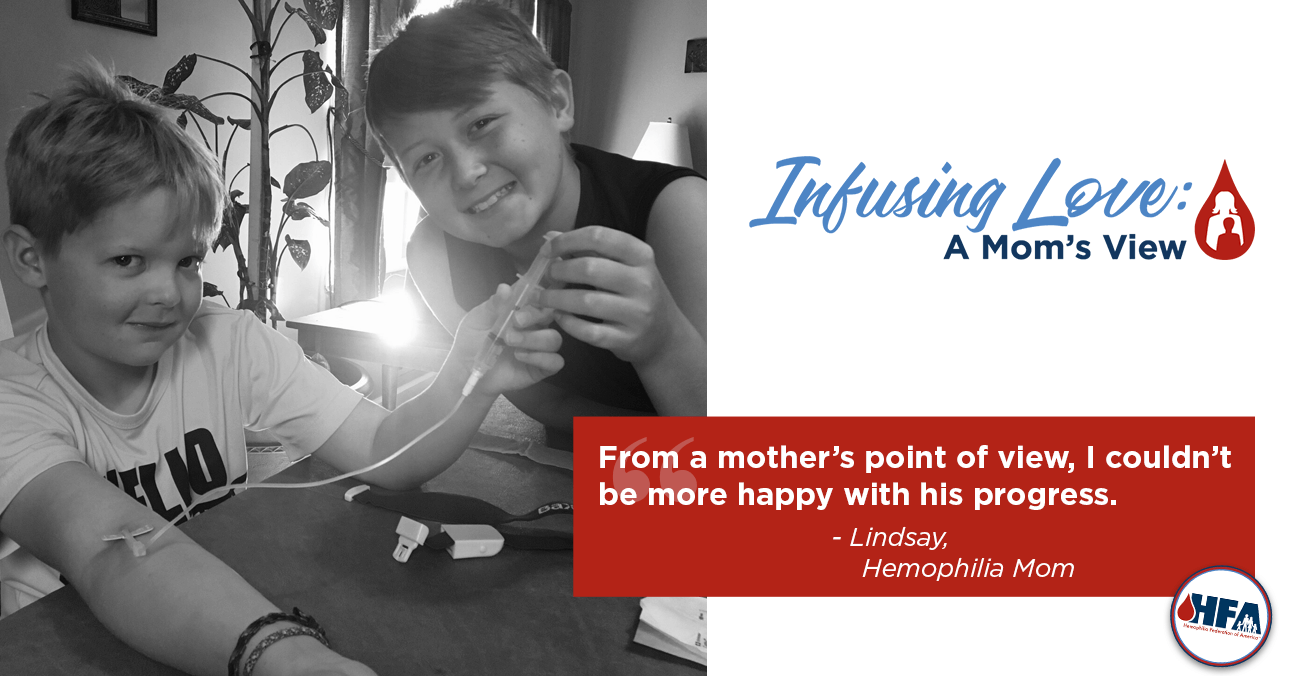 As time went on, Myles was becoming stronger and more stubborn about receiving his infusion. We tried everything we could think of to help reduce his anxiety and fear of getting his infusion. Some techniques we tried were; watching TV, using iPads, listening to music, using stress balls, and hugging me. We even saw a therapist who diagnosed Myles with a needle phobia (No kidding! Who wouldnâ€™t be when youâ€™re being poked two to three times a week?).

It was suggested by Mylesâ€™s hematologist to see a hypnotist, since heâ€™s had previous patients see one before which helped. We never had the opportunity to see a hypnotist though, because Myles was switched from a short-acting factor treatment to a long-acting in hopes that with decreased number of trips to the HTC it would reduce Mylesâ€™s anxiety and fear.

At the same time, the staff was teaching me how to infuse Myles so we could make the transition to self-infusion at home. The beginning was bumpy, especially when I had difficulty sticking the vein, which ended up more frequent than not. I would try up to three times, which was frustrating for both me and Myles, and then we would decide his infusion could wait until the next day. We would then try again. Myles was always a trooper, stating â€śMom itâ€™s OK, you can try in my other arm or my hand if you want.â€ť God, I love this kid for this encouragement!

Itâ€™s been almost a year and a half and infusions are going great. Myles has gained so much more confidence while at home now that he does almost everything, except sticking himself. Myles is even allowing family members to help him factor, which I think is great. Especially if Iâ€™m not around to factor him. From a mother’s point of view, I couldnâ€™t be more happy with Myles and his progress.

Lindsay lives in New York with her husband, Alan, and her sons, Zachary and Myles.

*Note: â€śInfusing Love: A Momâ€™s View,â€ť is a blog collection of personal opinions and a representation of individuals experiences. While extensive efforts are made to ensure accuracy of the content, the blog entries do not represent HFA or its Board of Directors. The blog is also not intended to be construed as medical advice or the official opinion/position of HFA, its staff, or its Board of Directors. Readers are strongly encouraged to discuss their own medical treatment with their healthcare providers.