Each year Hemophilia Federation of America honors the service of special individuals who have gone above and beyond in support of the bleeding disorders community. HFAãs 2020 awards were presented during a virtual ceremony on Aug. 25, 2020. HFA celebrates these individuals.

It Takes a Village Award 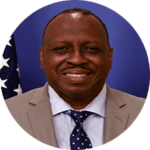 This award is provided to an individual who goes above and beyond in uniting the community and has demonstrated a unique ability to link those in need from the experienced bleeding disorder veteran to the newly diagnosed family.

For more 30 years, Harvey Gates Sr. has been an active servant leader in hemophilia and bleeding disorders communities throughout the country. His visions are to unite and empower families and provide a platform for the much-needed social support as families face the challenges of living with a bleeding disorder.

His fervor is also driven by the tragedy that struck the community in the 1980s, which resulted in the death of his father-in-law, mother-in-law, and a nephew due to hemophilia related complications. Since that time, he has worked to highlight awareness, and to ensure access to quality healthcare to those affected by Hemophilia.

We are honored to present Harvey Gates Sr. with the It Takes a Village Award.