A few months ago, Thomas was just getting over a foot bleed, ironically caused from snow boots that were too tight. (I mean, really? Â Snow boots?) After a week of not being able to do his nightly chore of taking out the kitchen trash, I declared his foot healed enough to take out the garbage. Since it was dark outside, I walked to the trash can with him.
As he lifted the heavy bag into the can, he faltered. I spotted him, grabbing the bag to help lift it. Â Unfortunately, I lost my balance and hip-checked him into the side of the house. The trash bag got caught between his elbow and the brick. Thomas yelped and went running back into the house. Sighing, I picked up the trash and tossed it into the can.
As I was walking back into the house, I heard my 7 year old, Natalie, very seriously say, “Whoa. That’s bad, Thomas. You’d better go get Mommy.”
Moms never want to hear those words, in that tone, from a 7 year old.
An angry and tearful Thomas was peeling off his long sleeve shirt when I noticed the blood. Â There was A LOT of blood coming from his arm. Â I shouted for my husband and we started cleaning Thomas up to determine just what had happened. I realized he had a deep, one inch cut just below his right elbow. Nathan went out to dig through the trash to figure out what had cut Thomas, and Natalie grabbed gauze and factor for me while Nora, our 11 year old, lazily asked, “Do you have to go to the ER? Â Again?” 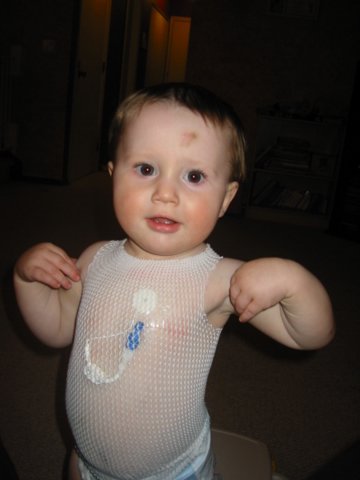 As I simultaneously infused factor and called the on-call doctor to let them know we were on our way the ER, Nathan came inside holding an aluminum soup can with the lid dangling. Â Clearly, this was our culprit.
Thomas and I arrived at the Emergency Room and he was understandably frustrated. I, on the other hand, was amused. Â I couldn’t help but laugh at the irony – here the kid was doing the most mundane, boring task and somehow hemophilia had played its trump card. Â How can something like taking out the trash, something so completely normal, land us in the ER at 8 PM on a Friday? I knew I’d never get him to take the trash out again.
Thomas grunted, “Why does this stuff always happen to me? I bet most people go their entire lives never needing stitches.”
I laughed, “Then those people are boring. Â They lead boring lives. You will never, ever be accused of leading a boring life, Thomas.” Â That elicited a small grin from him.
One thing I know for sure, since Thomas and hemophilia came into our lives, life has been anything but boring.
Early on, I longed for a “normal” life. Normal people don’t have to infuse their kiddos daily. Â Normal moms don’t worry about every head bump. Normal couples can grab a date night once in a while because they aren’t afraid to leave their kids with a babysitter. Â No doubt, hemophilia can be very fickle about when and where it decides to strike.Â  But once I started accepting the unpredictability of living with a bleeding disorder and decided to view our lives with hemophilia as anything but tedious or unexciting, I realized that “normal” isn’t all it’s cracked up to be. Â I finally figured out that living with this chronic condition and it’s random nature works pretty well for us.Â  For me, getting bogged down in wishing for “normal” was not an option because looking around at my other mommy friends, I realized I would never know that kind of normal.Â  I had to change my definition of normal. To our family it means infusions, bruises, and emergency room visits after mundane chores.Â  This adventure known as hemophilia is our normal and the conventional definition is just too boring for me

Sonji Wilkes was born and raised in North Carolina, where during high school, she developed an appreciation for volunteerism and community service. Â She graduated Magna Cum Laude with a BA in Behavioral Science from the Metropolitan State College of Denver in 2001. Â Sonji volunteers extensively in the bleeding disorders community and was selected as the 2006 National Hemophilia Foundation’s Volunteer of the Year. Â Sonji, her husband Nathan, and three children:Â Â Nora (11), Thomas (9), and Natalie (7), currently reside in Colorado.
______________________________________
*Note: “Infusing Love: A Mom’s View,” is a blog collection of personal opinions and a representation of individuals experiences. While extensive efforts are made to ensure accuracy of the content, the blog entries do not represent HFA or its Board of Directors. The blog is also not intended to be construed as medical advice or the official opinion/position of HFA, its staff, or its Board of Directors. Readers are strongly encouraged to discuss their own medical treatment with their healthcare providers.