Infusing Love: It's All About the People

In 2008 my husband, two kiddos and I traveled to our first Hemophilia Federation of America Â annual Symposium. We had been to a couple of NHF meetings since the kids had been born but we did not know much about HFA. Kim Bernstein, a truly talented community advocate, had been pushing me that I really needed to see what HFA was all about. My hubby and I figured, ” What the heck, we always learn something.”Â  So we packed our bags and traveled to Little Rock, Arkansas!
I actually don’t remember much about the many sessions we attended (considering my current role, that is a bit funny and something I remember as our staff plans Symposium now!) Overall, the true HFA meeting impact to us was something completely different from the sessions.
We met people — real people. Â We felt truly included as part of the discussion, not “talked at” by highly degreed experts. My kids made a teddy bear who had hemophilia and talked about what hemophilia was on their level (we liked one of the caregivers so much that we debated asking her to move north and be our nanny.) We also met an older gentleman with hemophilia who had never been on an airplane before, but had gotten a scholarship from HFA and had decided to come to see if it was true, that there really were other older guys with hemophilia still around. I’ll never forget him. He was simply tickled with the whole experience and all of the people he met! It was so real.Â 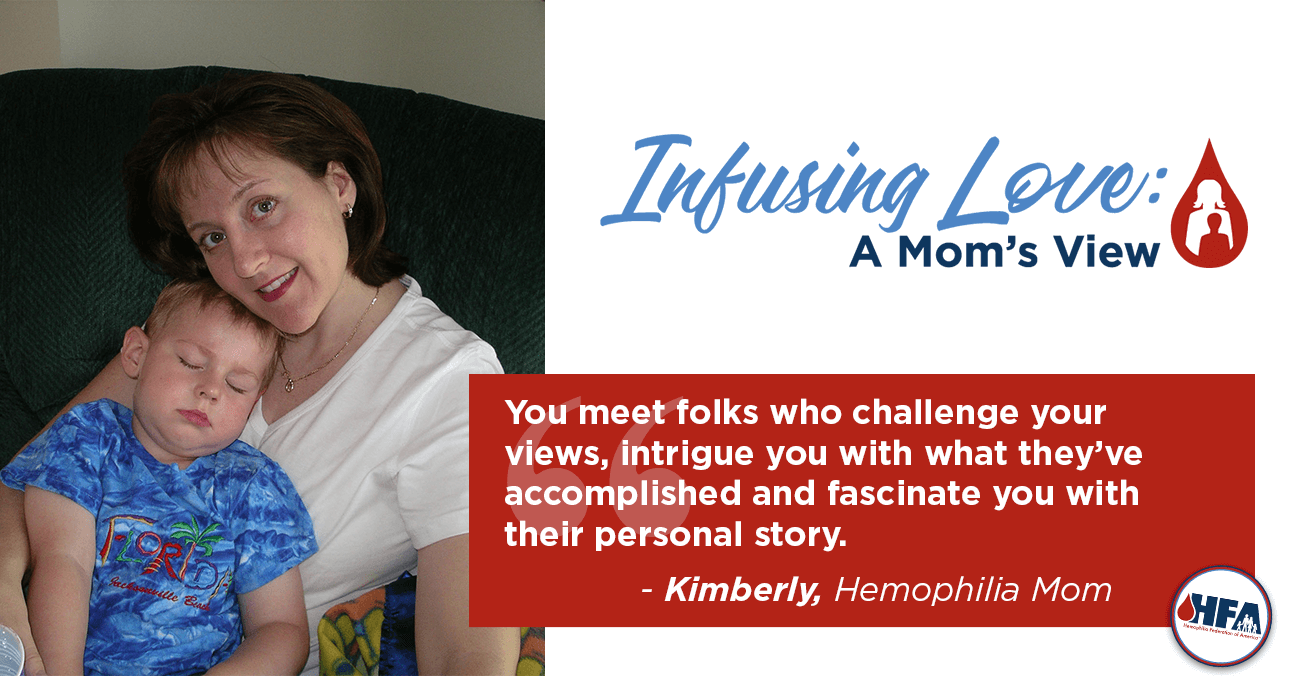 We also had fascinating conversations during that Symposium about our community’s history and why different organizations exist yet today. My family is one of the stereotypical “new families.” We have no personal history to draw from, but this community’s history was now our history, too. We needed to know what so many very passionate and committed families were championing in the 1990’s; real advocacy action with the government, doctors and pharmaceutical companies who had not put safety first for people with hemophilia. It is a very difficult message to learn about when your baby is napping in a stroller next to you – yet, how could we not want to know? We needed to understand and put it into context of what it meant for today.
The people at my first Symposium changed my view. It also ultimately changed our family’s daily life.Â  During that meeting, the current HFA Executive Director told the Board of Directors that she wished to step back in her role. Crazily, I had numerous folks encouraging me to apply for the position.Â  I was not sure about it but I had the desire. I have a corporate background – I’m a girl who loves building teams and can manage a budget, but I’m not utterly brilliant like hemophilia dad, Nathan Wilkes, who can successfully challenge Congress to a fact-checking contest in a hearing!
Our family was not on the ground fighting to be heard in the 1980’s and 1990’s, and sometimes I struggle with feeling guilty about being a completely unaware kid back then. “New Family Syndrome,” I guess? One can only learn from the past though. Our future is what we can influence.
My husband and I knew that health care reform was really heating up. We kept hearing a cure was coming and things like long lasting products were on the way. What other changes were coming?Â  How was all of this going to impact our Benny? That Symposium had a few more unique twists (seriously – how many other meetings have a tornado scare?!), but we made it back home. After tucking our little people into bed at night in the following weeks, my husband and I started to dialog about whether “new families” like ours had a role to play today.Â  Ultimately, I decided to join HFA as Executive Director.
What we as a family experienced at our first Symposium, is what I still hear over and over every year. HFA and Symposium is about people. Â As Executive Director at HFA, I absolutely know that Symposium is never perfect, but it is always about the people. You meet folks who challenge your views, intrigue you with what they’ve accomplished and fascinate you with their personal story. It is a comfortable feel where you have something special in common with each person there.Â  Symposium is a great mini-example to what HFA is all about. It’s about “family”.
Kimberly lives in Wisconsin with her husband, Howard, and boys Ben and Johnny. She is the former President and CEO of HFA.Â