Infusing Love: Prepared for Anything

Being prepared took on a new meaning after having Max.
It’s frightening and frustrating to know your child is hurt, but the key is to remain calm. Whether you’re on a trip or stranded in your own home, it never solves anything to panic.
For me, the hardest part of adjusting to hemophilia was what I called the “drop and run” syndrome. I had become a “follow the plan” type of person so it was an adjustment to be able to stop, change direction and stay sane. We were an hour and a half from our Hemophilia Treatment Center (HTC) so if we had an emergency trip it usually involved a good part of the day. It wasn’t long before most days followed plan “A”, but there was always plan “B” in the schedule in case I got a call from daycare or even if something happened at home.
I also had my emergency room bag. It’s a kind of “grab and go” bag with things like a book, some water, and snacks. There were diapers and all the other things we carry around when we have babies. As he got older and needed less of the “baby survival” items, the bag got smaller and easier to carry. Max is twenty now, and I still have one. I suspect that even after he’s moved on, I will always have one. It’s been a part of our life for so long.Â 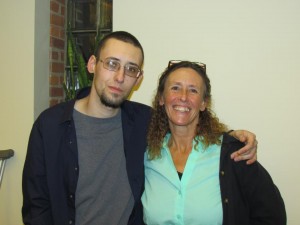 Max and I have always been pretty mobile. The first time he went camping he was 2 months old. We started out staying around New England, but as he got older we began to travel farther from home. Travel meant knowing where the closest treatment center was, having extra supplies and being capable of making decisions on my own. I have come to realize that if you’re away from home and something happens it will usually happen late at night. I have climbed into many emergency room beds with him to doze while waiting for the doctor, x-ray, or whatever came next. We were at an event unrelated to hemophilia one weekend when I heard someone ask where the nearest hospital was. I was able to step in and give them directions. Talking with them later I realized it had become habit to look for the blue “H’ signs whenever I arrived in a new place. Of course now with the magic of GPS that’s not so important, but it’s always in my mind to keep watch for those wonderful signs.
We as a community stress the importance of a medical alerts or some form of identifying tag which is very do-able when they’re young and Mom is in control. As long as Max was in diapers the bracelet was cut to size and fit nicely around the sticky strip on his diaper. When he was out of diapers we switched to bracelets. As Max got older the bracelet came off. After the initial panic and attempts come to a compromise, such as a wallet card — anything — I surrendered. I realize now that as an adult he has to make these choices on his own.
Flying brings its own set of issues in this super security age. Travel letters for TSA explaining the importance of having the medicine with them are helpful in security line. When Max’s nurse practitioner wrote a letter that stated “denying this patient the right to carry his medication could result in serious injury or death,” she wasn’t fooling around! Carrying factor on the plane instead of in checked baggage solves the risk of lost luggage. Letters explaining hemophilia, how to contact the HTC and the importance of trusting the patient’s competency in emergency rooms help to expedite things in the security lines. 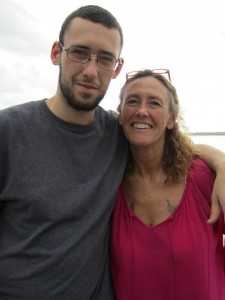 I grew up in a small town in New Hampshire, so for us losing power for days or being stranded at home are just a way of life; it turns out that made it a simple adjustment to the “drop and run” hemophilia lifestyle . The most important thing to remember about having any chronic illness is being sure to have enough supplies on hand. Even if we’re safe and secure in our home there’s always the chance that factor can’t get to us. The same is true of ambulance service. Out here in the country where snow storms hit unexpectedly, I have learned to be prepared to get Max to the hospital under any circumstance. When he was three he fell and broke his arm; of course it happened during one of the worse storms of the year. Into the truck we went and even though it took some extra time, we managed to make it to the ER that night.
I can honestly say the thing I am most unprepared for is adulthood. Even though he has managed his own HTC visits and supply orders for years, I’m still a mom. Like every parent, I want him to find his wings and take off, but I don’t know if I will ever feel like he can care for himself as well as I can. I know most parents worry if their kids are eating and sleeping right, showering, making new friends, and finding happiness. I often wonder if I will ever stop wanting to ask, “Did you treat?”, “How’s your ankle?” or “Have you called the HTC?”. Each age brings its own set of issues. There are times when I long for the simple days of broken bones, bleeds, and ER visits.
Maryann and her adult son, Max, live in New Hampshire.