Proud Mom of an Alphabet Belcher

From the time Thomas was an infant, I had been told hemophilia camp was not to be missed.Â  Kids and adults alike told me how wonderful camp was for them and how it was their most anticipated week of the year.Â  There are over eighty summer or family camps for persons with bleeding disorders in the United States.
Since our state’s bleeding disorder camp accepts siblings, our oldest daughter was able to go before Thomas was old enough. I didn’t give the poor kid much choice; I just signed her up and sent her on her way. I was worried that she might get homesick, but those worries were quickly quelled as we dropped her off. No way she could get homesick – there was so much to do! And it was such a happy place – camp counselors were chanting and singing as we parked, running to greet us, walking us through registration and then gently pushing the parents out the door. Â Nora went in apprehensive; but at pick-up five days later she was bound to a group of little girls, giggly, and happily sun-kissed. Â She had just had the time of her life.
That was all the convincing it took for Thomas to want to go to camp. Â He listened all year to her stories of pranking other cabins and daring the counselors and other campers to eat truly disgusting combinations of food. He hung on every word as she relived going horseback riding and catching a fish. I eagerly awaited summer camp too – I knew I’d be down to just one kid in the house for a week and camp was gloriously timed for that point in summer break where I didn’t know if I could stand it until school started again. 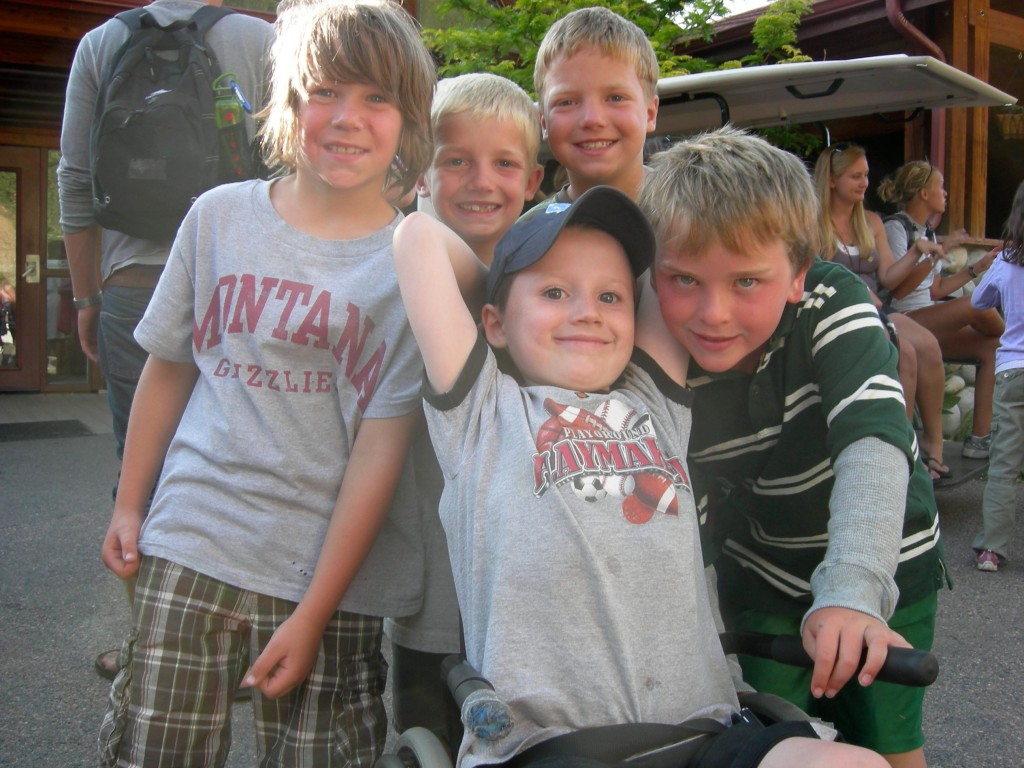 Thomas was all set to go, but the week before camp, we got a phone call. Â Seems there had been a miscommunication about the age requirements for camp and Thomas was not old enough to attend (He missed the cut-off date by a week). To say he (and I) were disappointed is a colossal understatement. Â After having a mommy meltdown on the phone with the camp director, it was decided that I would bring Thomas up on the second to last day and he could be a day camper.
We dropped Nora off on Sunday and Thomas and I arrived Thursday morning just after breakfast. He was recovering from an ankle bleed and in a wheelchair, so he went to the health clinic with the rest of the boys from his “cabin” for the morning infusions. Â There was an immediate bond between the boys and they even seemed to really rally behind Thomas since he was the only one of them with an active bleed. Â He spent the day on the zip line, horseback riding, doing archery, swimming and hanging out with his peers. I had been told that because Thomas wasn’t technically old enough, I had to stay by his side all day, so I spent that time chatting with the counselors from his cabin, savoring the insider’s look at the camp experience.
The lead counselor was appalled that at the last minute Thomas had been turned away from camp because of the age requirement. She understood how he had anticipated camp for over a year and how disappointed he was. Â She disappeared for a bit, but came back and said, “Could Thomas spend the night tonight? You’d have to stay too, but then he could at least get to have a full day and night with us.” Â I immediately started sobbing. Of course we could do that! Luckily, I had packed an overnight bag since I wasn’t going to drive back home from the mountains that night and had planned to stay with friends who lived close to camp.
Being able to see camp firsthand was amazing.Â  The day turned into night and while the hardcore physical activities wore down for the day, all the campers gathered for the talent show.Â  I can proudly say my child can burp the alphabet.Â  Only at camp would I find that hysterical.Â  I saw an older brother – one who does not have hemophilia – sing and play on the guitar an original song about his love of camp.Â  I shared meals and watched our beloved camp director eat a combination of pancakes, syrup, hot sauce, cereal, potato chips and orange juice.Â  (She only gagged a little.)Â  Counselors negotiated with the boys, trying to convince them that if they weren’t going to bathe, to at least change their underwear before their parents picked them up.Â  The boys in Thomas’s group built a fort behind their cabin, clearing a path up a mountainside so the counselors and I could carry Thomas up to the fort.Â  I decided that camp is one of those places where all the rules get thrown out the window, and that’s a good thing. 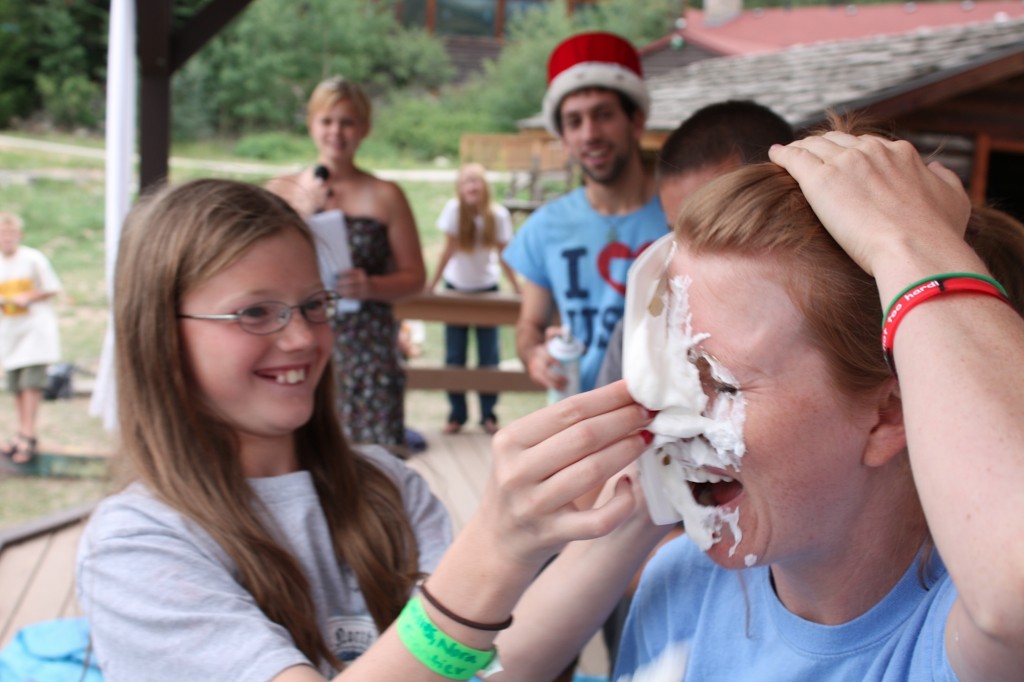 In the years since then, Thomas and Nora have attended camp each summer. This summer marks Natalie’s first year of eligibility and she can’t wait to go. Â Thomas has earned multiple “awards” each year for learning how to mix and infuse his factor. He has bonded with several twenty-something’s who return to camp each year so they can continue to teach the younger boys about self-infusion and leading healthy, productive lives.
Hemophilia camp is a special and magical place. Teens and college-age hemophiliacs and nurses let 7 year olds practice poking with a butterfly needle on them. Camp directors and counselors treat kids with bleeding disorders like any other kid, encouraging them to soar down a zip line, climb a mountain and live life to the fullest. I can’t say enough about the wonders camp has done for my children. If the registration form is sitting in your mailbox right now and you are still undecided about whether your child should go, I highly, highly encourage you to take the leap. Â You and your children will never be the same.
Sonji Wilkes was born and raised in North Carolina, where during high school, she developed an appreciation for volunteerism and community service. Â She graduated Magna Cum Laude with a BA in Behavioral Science from the Metropolitan State College of Denver in 2001. Â Sonji volunteers extensively in the bleeding disorders community and was selected as the 2006 National Hemophilia Foundation’s Volunteer of the Year. Â Sonji, her husband Nathan, and three children:Â Â Nora (11), Thomas (9), and Natalie (7), currently reside in Colorado.
_________________________________
*Note: “Infusing Love: A Mom’s View,” is a blog collection of personal opinions and a representation of individuals experiences. While extensive efforts are made to ensure accuracy of the content, the blog entries do not represent HFA or its Board of Directors. The blog is also not intended to be construed as medical advice or the official opinion/position of HFA, its staff, or its Board of Directors. Readers are strongly encouraged to discuss their own medical treatment with their healthcare providers.