I was a Runner; Now I’m a Warrior

Most of September 24th, 2012 is still a blur in my mind, but what clearly stands out is that it was the day my body stopped moving forward. My name is Courtney, and I have von Willebrand Disease (vWD) Type 1. People with von Willebrand Disease have decreased or malfunctioning von Willebrand factor and cannot form a proper platelet plug. If you look at my clotting level numbers, I am considered to be a mild bleeder. In my case, numbers didn’t really matter.
Before my injury, I was a runner. I used to walk and run without ever thinking it was a privilege. Running challenged me both physically and mentally. It reduced stress and anxiety from work and school. I craved what is called a “runner’s high,”-running to the point that endorphins are released into my system. Running taught me to not give up and to push through. I always competed only against myself. It was my own challenge and accomplishment. It was freedom.Â 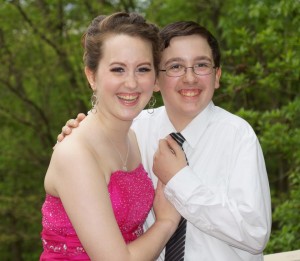 It’s only now that I realize what I took for granted. One day while running, I suffered an injury to my gastrocnemius soleus muscle that resulted in a bleed. I rehabilitated quickly and was soon able to run again. However, I re-injured the same area during a “hill workout” the first week of cross-country. My leg swelled. I used factor and did rest, ice, compression, and elevation (RICE) but I was told that I had “chronic compartment syndrome,”-a condition caused by exercise that results in pain, swelling, and even permanent damage of the muscle. Due to the risk of bleeding, it was thought that massaging the fascia would help with the release, but for me, it only made things worse. Within a matter of days, I felt tingling in my leg, I had lost full range of motion in my ankle, the belly of my calf was swelling, and my leg was feeling cold.
On September 24th, I underwent a number of tests, including a compartment test. My leg had locked into an odd angle and my pain kept getting worse. It seemed like I was on every IV narcotic imaginable, yet I was still in so much pain that I was constantly wide awake. The amount of pain medication made my blood pressure drop, and I was soon transferred to Children’s Hospital. By day three, I had developed a drop foot and by day nine, I had seen so many physicians that my head was spinning. What was happening to my leg was affecting the peroneal nerve, and my leg eventually turned black. I lost complete function of the limb. The pain was so great that even air moving by my leg sent me over the edge with mind-numbing pain. Not one narcotic medication alleviated the fire. At the time, all I knew was my leg didn’t work and it did not look normal. Thoughts raced through my mind, but I could not put words to feelings because I was so afraid. 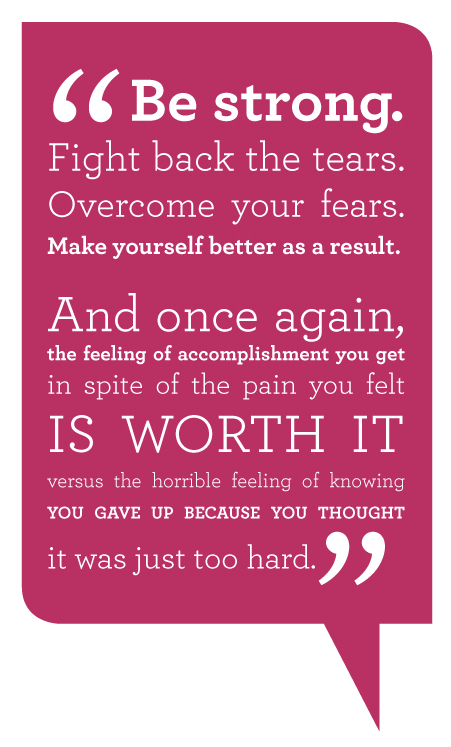 I thought I knew what fear was. This, however, was a different type of fear that I didn’t know existed. I was afraid to even say the words I was thinking because I thought that if I did, it would make all of my fears come true. My life flashed before my eyes. The normal life I had with my leg. I could not imagine living the rest of my life with the pain I was feeling. Every time my leg turned black, I thought for sure I would lose it. Running did not matter anymore. Walking was now what did matter. I was diagnosed with Complex Regional Pain Syndrome (CRPS), a disease characterized by neurological pain from receptors mis-firing constantly. Ten days after I was admittedÂ to the hospital, I moved to a rehabilitation center to learn how to walk again.
At this point, all narcotics were stopped because they could not help with nerve pain. One of my physical therapists told me that I had to learn how to breathe to manage the pain. Later, I learned that this was called biofeedback-a technique that allows you to control your body’s physiological responses, such as pain. I had nothing left but my mind to fight what was happening, so I latched onto the hope that the physical therapist knew what he was talking about. My pain scale went from a 1-10 to a 1-100, because for me, I had to see (in my mind) that a 98 on the pain scale was better than a 99.
I started therapy in a warm pool and experienced the type of pass-out pain many people never do. My leg was still black and mottled – it floated because I still couldn’t control it. I breathed as I was taught to do. I also cried aÂ lot. No one was allowed to touch me, as the simplest of vibrations shot my pain to a 100 or more. 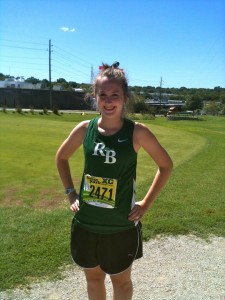 It was aqua therapy that helped rehabilitate me and aided in pain control, in addition to the breathing exercises I was being taught to master. My running coach taught me to never give up, and I used that to focus my mind when pain would become too much for me. My mom was by my side day and night and ended up becoming my new coach. The one thing I knew was that if I did not fight, von Willebrand disease and CRPS would overcome me. I fought hard even when pain took me away from everyone that loved me.
Thankfully, no one ever gave up on me. When I took my first steps, it was like hundreds of pins, needles, and knives stabbing my foot and leg, but I did it. And I did not stop there. I used biofeedback to bring me back when I hit the “pass-out” type of pain. As I was figuring out how to breathe correctly, I started to learn that biofeedback wasn’t going to heal me or take my pain away completely. What it did do was bring me back to my baseline pain level. At this level, I could make the choice to live with it or let it take me and end up bed-ridden. I had to fight. I spent a total of 30 days in the hospital. When I was released, I was only taking small steps outside of the pool and was still wheelchair-bound. My long-term goal was to walk freely across the stage at my high school graduation. The following May, I did just that. There have been setbacks along the way and new challenges, and I am sure there will be more in the future. But this will not define who I am or will become. I will breathe with every step. I still refuse narcotics now, even with staggering muscular and mechanic pain. Pain will not win.
I was a runner, but now like my family reminds me that I am a warrior.

Courtney is a freshman at the Moberly Area Community College and lives in Missouri with her mom Nancy, her brother Connor (both are also affected with von Willebrand disease) and her father, Greg.