Humor in Your Hemophilia Bag

Most moms who have a child with a bleeding disorder know the ER drill. Despite being a veteran, I honestly forget every time how it works. Even in a metropolitan hospital that is affiliated with a hemophilia treatment center, a rare chronic condition like hemophilia is such a novelty with medical teams. We had what I would call the classic ER visit with my Benny earlier this year; it reopened my eyes as to how vital it is that families maintain some fun in what can be a pretty stressful life living with bleeding disorders.
Adapted from my personal journal: Â 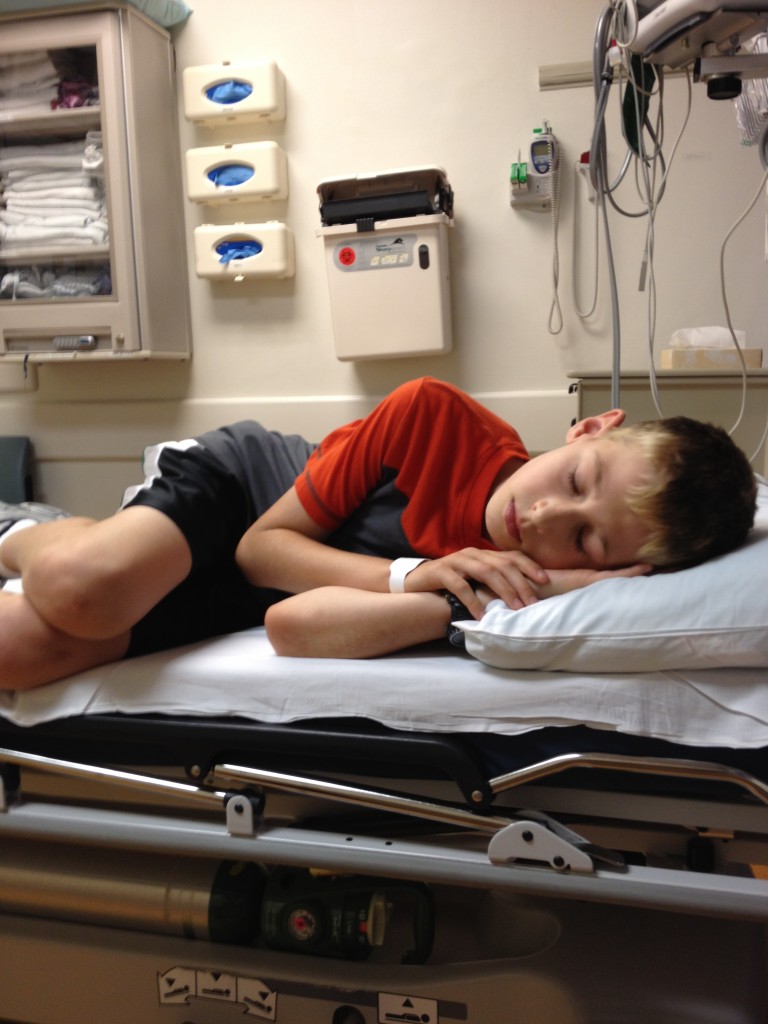 We are in the ER again. Ben and I are not stressed at all. I’m actually pretty amused, and with a roll of my eyes, am thinking, Â “here we go again.” Â Â I have already spoken to our regular hematology nurse and know exactly what Ben needs, since we have been through this hip bleed thing before.Â  We factored up with a double dose before we came and are now slogging through the evaluation process to get to the real reason why we came: to do an ultrasound to find the bleed.Â  Ben is completely focused on solving his Rubik’s cube. Â The inventor of this gadget is my new hero.Â  The cube has completely absorbed my son’s attention. He’s wonderfully distracted!
The hematology clinic has called orders in ahead to the ER, so we check in up front and head off to triage.
The triage nurse questions me, Â “What type of hemophilia does he have? The regular kind or the A or B? When did he get his hemophilia?”
We are escorted to a room in the ER, and a new nurse asks, “So, he has had a history of hemophilia for several years right? How often do you go in for infusions?”
To the second question, I respond that we treat at home. Â She says, “Oh yes, I know you take care of him at home, but for his infusions, how often do you take him in to get them?”Â  I reply that we do them at home several times per week. Usually, I do them, but Ben helps and can do it himself if he wants to. “We can show you where we accessed him this morning,” I offer, pointing to the Band-Aid on his arm.Â  The nurse replies, “Oh, really? Oh-kaaay. I will cancel the order for factor VIII then.” Â She leaves so quickly that I don’t even have a chance to respond. Â I just sit there for a minute, stunned, shaking my head, thinking.Â  “Ben has factor IX, not VIII.Â  Oh boy. I need to review that with her when she gets back!”
Despite all, I am encouraged at this point: Â at least she knew infusions were necessary!
Several hours pass with the resident and nurses popping in and out. The resident physician comes in to ask the bazillion completely unrelated, but necessary questions, and to yank at Ben’s bleeding hip in order to diagnose the bleed we already knew we had.Â  I always struggle to see them pressing on the areas I know hurts my kiddo. Finally, the resident pops back in to say he was asked by his boss to find out how we gave Ben’s factor to him.Â  I told him that Ben doesn’t have a port anymore so we used the vein in his arm. “But how exactly did you give it to him” he asks.Â  I do not understand the question and ask.Â  “What do you mean?”Â  “She wants to know how you gave him the factor,” he repeats.Â  At this point, I really don’t think he knows what she’s asking either.Â  (After thinking about it later, I suspect he wanted to know if we used a butterfly or had has a port. Maybe?) 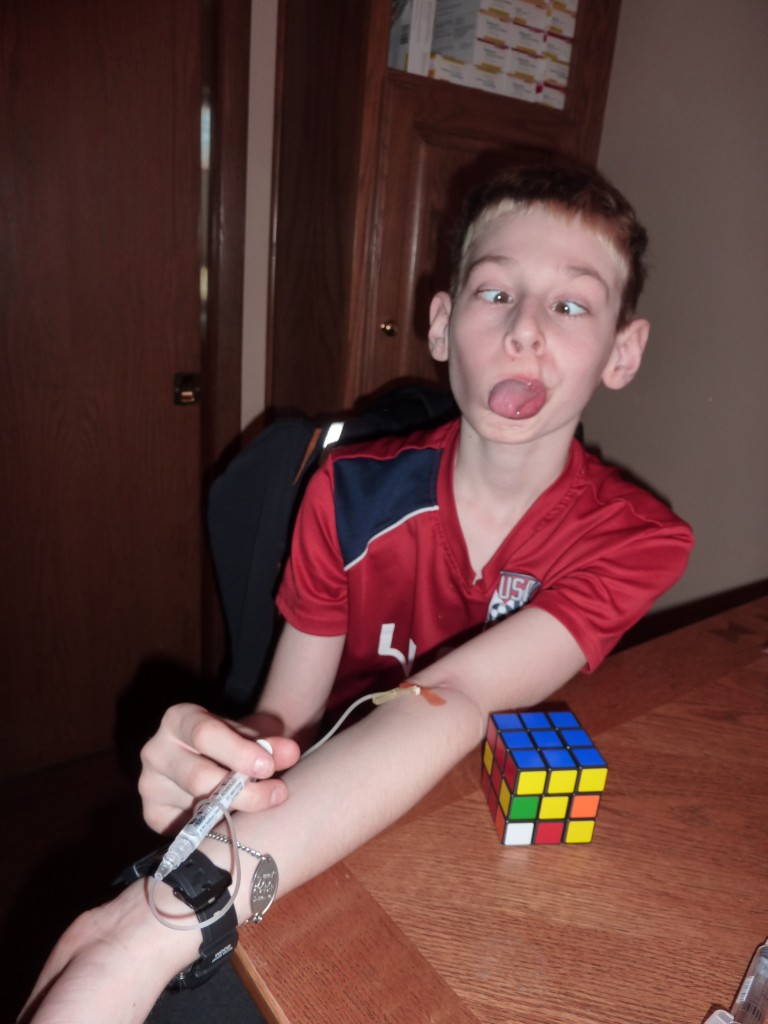 At this point, humor takes a hold.Â  I look at Ben, still cranking at his Rubik cube and simply can not resist saying, “Oh! Well, just tell her it is his hip hurting, so I just mixed up the factor and rubbed it in really well all over his hip so it could soak in quickly.”Â  He stares at me for about 5 seconds before I break down laughing.Â  The very serious resident then turns into a real person and becomes our partner.Â  He tells me he can’t tell her that as he bursts out laughing too!Â  We agree that might indeed be over the top, but decide, instead, to have some fun and tell his attending physician that I mixed the factor up and put it in Ben’s orange juice this morning before coming in.
It takes perhaps two minutes for the attending physician to show up to examine Ben herself! Ben hits a home run then: he looks at me as she walks in with the resident, smiles and says, “Mom, you know I actually like grape juice with my infusions better.”
All in all, this was about a six-hour visit.Â  Pretty normal overall, but coming in with humor in our hemophilia bag made this one a fun memory for Ben and for me.
Thank goodness for humor.Â  Fruit juice might not be a standard compliment to infusions, but we get a giggle every time we think of the merits of orange juice verses grape juice accompanying our infusion time.
Kimberly lives in Wisconsin with her husband, Howard, and boys Ben (11) and Johnny (9).