Adoption as an Option

By Holly Leber Simmons, freelance writer
Natalie Andrews remembers the first time she saw a picture of her son, Samuel, in 2016. “He looked terrible. He had black eyes and it looked like someone had punched him,” she said. “His joints were badly swollen; he couldn’t walk.”Â
Samuel, then 4, was living in an orphanage in China. Natalie, her husband Jason, and three daughters-Kyleigh, now 16; Kaelyn, 13; and Aubrey, 10-were told that he had a bleeding disorder that made him bruise easily, but he had not been tested specifically for hemophilia.Â 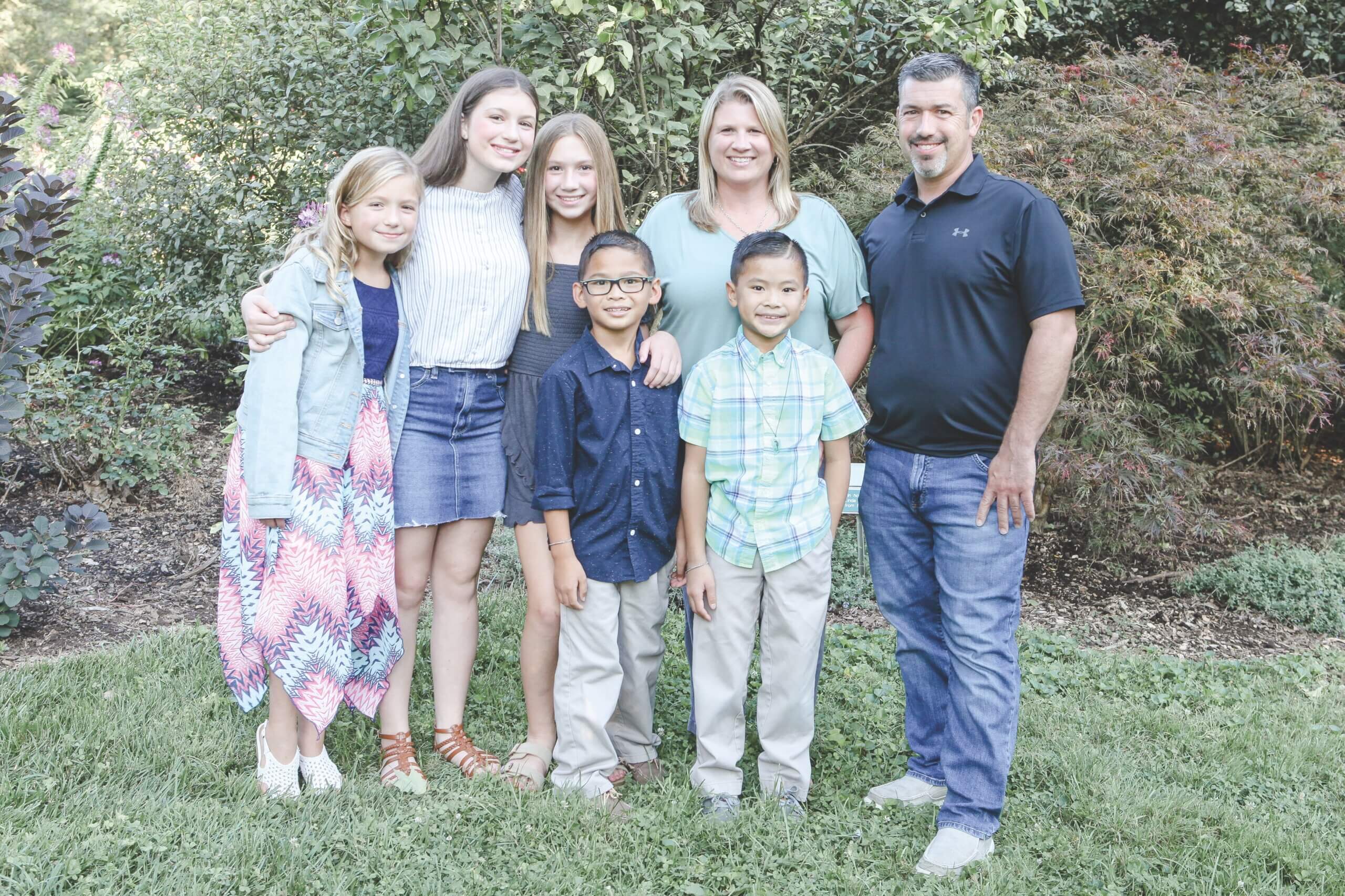 The parents knew the word “hemophilia,” but that was the extent of it. “I knew literally nothing about hemophilia,” Natalie Andrews said. The family brought Samuel home to Central Ohio on a Friday and went to the hospital that Monday. The little boy was diagnosed with severe hemophilia A and received his first factor infusion that day.Â
That eight-hour day was overwhelming, Andrews said. “I remember being in the car and thinking of all the things he was going to go through and breaking down at that point. It changes what you think life is going to look like and you realize it’s going to be a lot harder than that.”
Adoption and bleeding disorders both come with their own challenges. Combined, new challenges arise. But there is a lot of joy too, and several bleeding disorders community members have built their families through adoption-while also recognizing that kids with bleeding disorders may be less likely to get adopted.Â
Shari Luckey, MA, program services manager at the Hemophilia Foundation of Michigan (HFM), works with families considering or in the process of adopting children with hemophilia by providing resources and support. HFM also offers a hemophilia adoption scholarship (see https://bit.ly/hemophiliaadoption).Â
“There are challenges of adoption with any child integrating into a family,” Luckey said. “I try to give them the reality that it’s not goingÂ to be all rosy and perfect.”
Adoption and bleeding disorders is familiar territory for Luckey. She is a carrier and has mild hemophilia. Her oldest biological son, 27, has severe hemophilia B with inhibitors. She has twin daughters, 21, one of whom has mild hemophilia, and her youngest, Luke, 20, who was adopted from China in 2010, has severe hemophilia A.Â 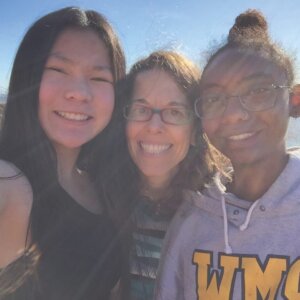 Hemophilia is also a familiar world for Horowitz. She has mild hemophilia A and has hemophilia in six generations of her family. “Growing up, they didn’t think girls could have hemophilia,” said Horowitz, who was diagnosed at age 45.Â
Horowitz has two daughters, Tehilla, 19, adopted from Addis Ababa, Ethiopia, at age 5, and Eliana, 17, adopted from Xiushan, China, at 10 months. Neither girl has hemophilia, though Eliana has bleeding of unknown causes, sometimes called BUC.Â
Horowitz started thinking about adoption, rather than being a biological mother, as early as the third grade. “My health didn’t even come into consideration with the adoption agency,” she said. “They look at health limitations, but hemophilia wasn’t listed because at that time it wasn’t believed that women could have it. My health doesn’t limit me much; I am one of a small subset of women on prophylactic treatment, which keeps me safe and healthy. When looking at adoption versus birth, there are some personal, philosophical questions that there are no right answers for.”
Horowitz’s sister, who also has mild hemophilia A, has biological children, including a son with hemophilia, who is doing quite well, Shellye Horowitz said. “I like that our family has both. I would hate to see the fear of passing along hemophilia stop someone from their dream of having a biological child. My dream was to adopt.”Â

Communication is essential-with doctors, within families, with adoption agencies and with fellow parents. During challenging times, the Andrews family has found information, comfort and camaraderie in connecting with their local hemophilia group and online communities for adoptive parents and parents of children with bleeding disorders.
“These families have been going through it,” Andrews said. “It’s great to get the kids together with others who are like them. It was scary and hard. A lot of days are still really hard, but it’s the best thing we’ve ever done.”
It was through a Facebook group for parents of adopted children with hemophilia that the Andrews family learned about their second son, Elijah, now 8, whom they brought home from China in 2018. Elijah, like Samuel, has severe hemophilia A.Â
“Since hemophilia is a genetic disorder, a lot of people who have it have a relative to share the experience with,” Andrews said. “It was neat being able to adopt another child with hemophilia knowing they would have each other.”Â
Connecting with other adoptive families with hemophilia has been essential for the Secinaro family in New Hampshire: mom Kathy, dad Rob and son Shane, now 20. Shane was adopted at four weeks old and has moderate hemophilia A as well as Hashimoto’s disease, in which the immune system attacks the thyroid, and Wolff-Parkinson-White syndrome, which is when there’s an extra electrical pathway in the heart that causes periods of abnormally fast heartbeat.
“Our knowledge of hemophilia before adopting Shane was zilch,” Kathy Secinaro said. “Looking back we had heard of the Ryan White story, but neither of us had heard of anyone with hemophilia.”
They connected with a hemophilia family camp and got to know other parents they could talk to. Secinaro advises prospective parents of children with hemophilia to make those connections with other bleeding disorders families. “You can get support and advice from others, and lean on them.” For example, when she had trouble infusing, she’d call another mom. And over the years, Shane has become close to some of his blood brothers, which has been helpful.Â
Luckey’s role is to work with prospective families to help educate them about living with and caring for a family member with a bleeding disorder. While the adoption procedure involves multiple steps for approval, families are not required to receive any training in caring for a child with a bleeding disorder, so getting information from organizations such as Hemophilia Federation of America, HFM or their local hemophilia treatment center is essential.
“I talk to people about how most of the time it’s a manageable disorder, much like someone with diabetes,” Luckey said. “We talk about how the treatments have come so far, how supportive the treatment centers are-like they teach you how to do infusions or they can send a nurse to come in and do it because it can take a while to transition into doing the treatments yourself.”

You Are Your Family’s Advocate

But even if a family has a lot of experience with bleeding disorders, there are specific questions they should ask related to the child’s medical and life history and education.Â 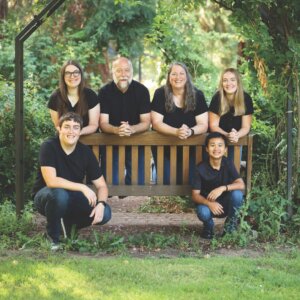 Madonna McGuire Smith, MPA, knows bleeding disorders well. She’s been working in the bleeding disorders community since 2009 and is the executive director at Pacific Northwest Bleeding Disorders, a patient advocacy organization in Oregon. Her husband and her three biological children, now 21, 19 and 17, all have von Willebrand disease (VWD).Â
The family adopted Gavin, now 14, from China when he was 10. He has severe hemophilia A. “It was difficult to communicate with Gavin’s caregivers because of the structure of international adoptions,” McGuire Smith said. Instead of being able to directly speak with the caregivers, the parents had to communicate with the U.S. agency, who communicated with the Chinese agency, who then communicated with the orphanage in China.Â
McGuire Smith said there are so many questions now that she wishes she would have asked, and she wants to share her “lessons learned” with other families. “We wereÂ
so worried about the adoption process, filling out the paperwork properly and about being approved that we didn’t think about all the questions we should ask about our son,” she said.
It’s essential for parents to be well-armed with information and know what questions to ask-about the child’s entire medical history, not only the bleeding disorder-to advocate for their child and their family, she said.Â
Here are questions McGuire Smith suggests asking during the adoption process:

“When people ask me “would you do it again?” I always say resoundingly, capital letters, YES,” McGuire Smith said, “but next time I would do a much better job educating and preparing myself.”Â
Strong communication in a marriage and family is essential also. Mothers especially, Secinaro said, need to share the physical and emotional load. “When our kids have a serious medical condition, we as moms tend to be the major caregivers,” she said. “If you have a partner, bring them in early on to learn the processes.”
In the Andrews family, it was the dad who learned how to infuse the boys at home. Now, Sam is learning to infuse himself. Likewise, Secinaro said of Shane, who learned to infuse at age 9: “Him learning to infuse himself and manage his own body and his own medical condition has been incredibly empowering for him.”Â
The hemophilia adoption groups on social media, Luckey said, tend to be 50/50 people who are well-versed in hemophilia, such as those who have biological family members with bleeding disorders, and people who don’t know much. Those more in the know don’t tend to stress too much, she said. They want to know about the child’s physical state, whether they are on prophy, how their joint health is and if they have had head bleeds. On the flip side, someone who hasn’t been exposed to hemophilia is usually more worried: What happens if they get cut? Can they play? Can they do the things other kids do?
These groups and bleeding disorders organizations help parents understand that it’s more about being prepared for possible outcomes than overwhelming kids with limitations. “I want my boys to be able to experience almost anything,” Andrews said, “and not live in fear or put them in bubble wrap.”
For instance, she said, Sam wanted to play soccer but his doctors recommended against it. As a compromise, they found a non-competitive scrimmage team with younger children and he agreed to infusions before practice. “But,” they told him, “if you twist your ankle, you could have to spend the week in the wheelchair.”Â
In spite of the adjustments and challenges, these parents share the same message for families considering adopting a child with a bleeding disorder: Go for it.Â
“From my perspective and most of the families I’m aware of, it is a worthwhile journey, albeit with its ups and downs,” Luckey said. “We have become better people through this process. People used to tell our son, ‘you’re so lucky,’ and I’d say, ‘We’re the lucky ones; he has blessed our family.'”