Maintaining a balanced diet, staying physically fit, and managing stress are important for everyone, especially those living with a bleeding disorder. A regular, safe exercise program protects the joints, and can even help decrease bleeding episodes
According to a recent study, “Overweight and obese people are now more prevalent in the bleeding disorder population than previous generations, with rates similar to, and in certain subsets even higher, than that of the general population. Increased Body Mass Index (BMI) leads to limitations in joint range of motion in the general population, and even more so in persons with hemophilia.”
Matt Stinger is a patient with hemophilia, registered nurse, and participant in HFA’s 2012 Gears for Good annual bike ride. Matt shares his story about how exercise is the key to staying healthy, protecting joints, and decreasing bleeding episodes. 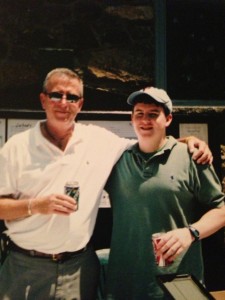 Where you active growing up and throughout college?

As a kid, I always swam and biked with my family to stay healthy. After graduating from nursing school in 2006, I found that I wasn’t as active as I once was. I was working in the emergency room and was constantly on my feet, but on days off I found myself on the couch, not motivated to workout. I fell into a period where I wasn’t really doing much of any physical activity. Looking back, I noticed that I was getting increasingly more spontaneous bleeds, especially in my joints. In 2008, I had a left elbow synovectomy. I recovered from surgery by going through a lot of physical therapy, but quickly found myself back in my old routine.

Was there something that helped you to make the decision to start living a healthy lifestyle again?
During the time I wasn’t active, my brother kept bugging me to join a gym, but I would always find excuses why it wasn’t the right time, until I finally decided buy a gym membership in February of 2012. After going a couple of times, I started to notice a difference, and it soon became addicting. I lost between 35-40 lbs within in the first 6 months and the passion I had for life was back.
What differences have you noticed since you started living a healthy lifestyle again?
Aside from my physical appearance and increase in confidence, I’ve noticed that I bleed less. When I was less active and heavier, I was infusing more often due to frequent spontaneous bleeding episodes, but since I’ve lost the weight, I now use less medication and make sure that I follow my treatment regimen. If I think that I have a possible injury I stop, infuse, and rest for a couple of days. Listening to your body is one of the keys to staying on top of your condition.
What do you now do to maintain your healthy lifestyle?
I swim, bike, and work on core and muscle strengthening three to four times a week. I travel often but find ways to make sure I get my workouts in. I don’t want to lose the progress that I have made, and on days that I can’t workout, I try to choose healthy food options and cook my own meals. 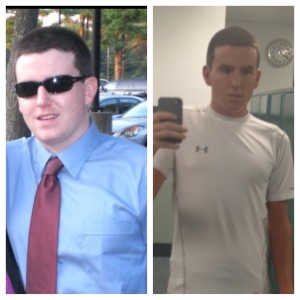 Now that you are living a healthy lifestyle, what keeps you motivated?
I stay motivated and on track because I now know the consequences of living a sedentary and unhealthy lifestyle. There are little things I do such as taking the stairs or parking a further distance away and I make sure, whether its swimming, biking, or muscle strengthening that I it fit in on those days. It also makes a difference if you have someone to work-out with to help motivate one another. I have been using HFA’s “Get in Gear” app to track my accomplishments over the past year. The app has an award based system that rewards you with badges based on the duration and distance of your workouts over time. I just received the 100 mile swimmer badge and as silly as it sounds, I was on a mission to obtain as many of these badges as I could. Staying fit is one of the best things that you can do for yourself and make sure to find a routine that works for you. My hemophilia has in turn played less and less of a role in my life since getting back in shape.
What advice would you give to someone with a bleeding disorder reading this who was in the same place you were?
Having an overall healthy lifestyle is essential. You won’t experience change overnight, but it will happen if you stick with it. When you are bleeding less, you can do more, and be held back less. It’s worth all the time invested because it makes you stronger in your physical appearance, attitude, and mental stability.
Everybody is different, but listen to yourself and tailor your workouts accordingly. If your ankles aren’t in the best shape, then you probably shouldn’t run, but don’t let that stop you from doing something. Use an elliptical, swim, or do anything that you enjoy. Remember, it’s not what you can’t do in life; it’s what you can do. 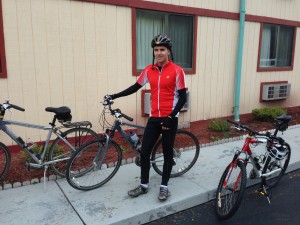