Infusing Love: Is There A Manual For That?

We have all heard the clichÃ©s about needing a manual for parenting but one doesn’t exist. Parenting is hard, exhausting work. Hemophilia parenting is a whole other dimension; one that vaguely looks so surreal that it cannot possibly be the way we live.
I remember the doctors, nurses and other HTC staff members loading us down with books, binders and pamphlets. To this day, I still have three copies of “Raising a Child with Hemophilia.” I wonder, “Did I willingly accept three copies or was it the bright lights of the NICU that clouded my already foggy and sleep-deprived mind?” As the saying goes, “information is power.” The hemophilia community should be really powerful with all the information we have access to, but I don’t feel powerful.
I feel like we were given information about hemophilia, but not on parenting hemophilia. That, I guess, is left for me to discover on a trial and error basis. What the books, binders and pamphlets leave out and what the doctors, nurses, and HTC staff cannot tell you is the information you really want to know: how-to-parent-in-three-easy-steps sort of information.
Although it has only been three years, I can look back on moments where parenting was too hard and parenting hemophilia was even more painful. When Logan was 11 months old we had his broviac replaced with a port-a-cath. Two months later (and almost a year of Immune Tolerance Therapy (ITT) later), my husband and I were doing Logan’s daily factor routine. But on one particular day, something was not right. As I held a screaming 13 month old in an attempt to maintain a sterile field, the needle just would not work. The frustration and pain was quickly escalating. Gloves that were once sterile and unsuccessful needles were scattered around our living room.
I was sobbing. 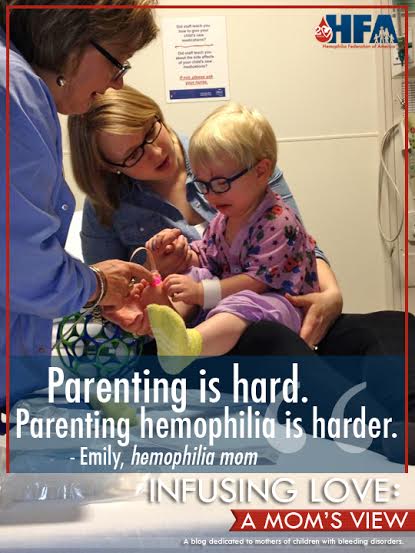 My husband was prepping another needle.
Logan was screaming.
We were failing as parents. We were failing at parenting hemophilia. And sadly, we felt like we were going to waste almost $1,500 in factor. After what seemed like an hour, my husband threw the needle. We needed a break. Â I sat there on our couch, cradling Logan while I waited for someone at the HTC to call us back. I sobbed. I apologized for bringing this terrifying disorder into our lives; for not being able to do what we needed to do as parents.
Almost an hour later, a homecare nurse who specialized in accessing ports came to help. She couldn’t access the port either. We breathed a pitiful sigh of relief; it was not just us: Â we may have failed, but so did the professional.
The following morning we spent the morning in the HTC. The port-a-cath had semi-dislodged and moved. This was information that was missing from the books, binders and pamphlets. Surgery was scheduled for the next morning. I am happy to report that we have yet to experience another heart-wrenching accessing session since then. But the memories of that night still float into my mind when I am tired of and overwhelmed by hemophilia.
Sadly, parenting hemophilia doesn’t get easier with time. The information missing in the books only seems to grow. Logan is like all other little boys: he loves to run, jump and play. Some of the most painful moments are when you have to tell your wide-eyed little boy that he cannot do something, even though all the other little boys and big boys are doing it.
We were recently at a picnic that had a bounce castle and obstacle course. Logan was thrilled – he was literally dragging my husband to the brightly colored inflatables. As we approached it was evident that neither the castle nor the obstacle course would be safe for Logan. There were big kids and little kids going crazy. I envisioned slamming heads and flaying limbs. My husband and I looked at each other and without speaking, knew that Logan needed to leave the picnic. The little boy whose blood doesn’t clot doesn’t get to jump in bouncy inflatables. Not because I am an overprotective parent, which I am, but because I have to parent hemophilia – not just parent.
I rarely bribe Logan, but I bribed him with fast food, specifically a Wendy’s frosty. And as we walked up the parking lot to the car, I cried because I was angry. I cried because I felt utterly alone. I cried because I knew that no one understood why I had to carry my weeping three year old away from something fun. I cried because there are certain things that Logan will never get to experience because of hemophilia.
I buckled him into his car seat, kissed his forehead, turned to my husband and continued to sob. I asked him how terrible I looked and if my mascara was running down my face. I was volunteering, which meant I had to return to the picnic we just left. The Wendy’s frosty seemed to be just the thing to eliminate the confusion and hurt of Logan, but it was another moment where I couldn’t look up how to handle this parenting dilemma. I just knew that I needed to remove Logan from the situation because it is unfair to repeatedly tell a three year old ‘no’ when he does not have the cognitive understanding that it is because of hemophilia.
I have always wanted to give Logan the confidence to run, jump, play, and do it over and over again, but sometimes I have to use discretion. Not because I am punishing him but because I love him so much that the possible pain is too much to handle.
Even though Logan did not come with the book, binder or pamphlet that I wished he did, I can do this – I don’t need a manual to remind me every day of this sweet little boy in my life even if it sometimes breaks my heart to infuse or tell him ‘no’ to something that looks so fun.
Emily Boyer lives with her husband, Geoff, and 2 year old son, Logan, in Minnesota.