Bleeding disorders like hemophilia can mean days of isolation, worry, and pain. This life is stressful, but sometimes days are filled with hope and promise. Thankfully, we have had many of those hopeful and helpful moments.

When Benny was a baby we had the good fortune to attend a local community picnic and meet a group of other families with bleeding disorders. They helped us understand our new version of normal. That day we learned that we’re not alone. Ultimately that connection inspired us to get involved, first locally and later nationally, and with HFA.
Those hopeful moments didn’t end with that first connection. They have repeated so many times over the years. I think back and chuckle about when Benny turned nine-years-old and a group of adult men with bleeding disorders (aka: Blood Brothers) came together to have a “camp intervention” with me. They insisted that sending Benny to camp was what he needed. They were right, and he will be headed out for year six in a few weeks. I’ve been honored by literally dozens of these little moments over the years.
Two other moments that stick out in my mind are when a few years ago we were on a 4th of July trip and a little lady we’d never met helped us out when Benny had a gusher of a nosebleed, and then two years ago when Benny’s best friend, Aidan, demonstrated what a giving young man he was after we chatted about the Gears for Good Charity ride when he offered his own savings to support the cause. Working with HFA has probably given us more access to these moments but I absolutely hope that means we are in a position to give more back as well. In 1916, author Lily Hardy Hammond wrote, “You don’t pay love back; you pay it forward.” I adore that thought.
What I never expected was the opportunity to “pay it forward” so close to home.
A couple of weeks ago I took Benny to a regular clinic visit. We checked in and were in the waiting room when a woman with a stroller came into the waiting area. The little guy in the stroller had a few bruises and a big shiner around one eye. He looked like he was about a year old. It was hemophilia clinic day, so in all likelihood, the little guy probably had hemophilia. Of course I could not resist striking up a conversation with the woman, exclaiming about the adorable little chubby rolls around his arms and legs. It reminded me of Benny at that age and I laughed and said, “Your hemophilia infusions sure were harder in those days!”
It turned out that they were a newly diagnosed family and had never met another hemophilia family before. The mom, Tara, was really excited to connect. I was surprised to find out that both our boys have severe hemophilia B. They had been struggling with infusions and we commiserated about how hard babies are to poke sometimes. Benny was then called back into an exam room so we quickly said we’d try to chat again before our clinic visits were done and trade information so we could connect after too.
A few minutes later Tara stuck her head into Benny’s room to give me her name, email, and phone. I popped out into the hall to chat. Two clinic staff came around the corner and stopped to say hello as well and exclaimed that we were neighbors. “Yeah,” I thought, “They’re in the next exam room so I suppose we are neighbors.” One made another odd comment about us being neighbors and I looked at Tara and asked her where she lived. When she told me, I laughed. We live in the same little town! “Yes, you are neighbors,” the clinic staffer said yet again, which seemed very strange. I asked Tara, “What street do you live on in our town?” Tara shared and as it turns out, we live about five blocks from each other on the same street. We are not related. One of us is a hemophilia carrier, the other is spontaneous.
What?! Seriously?! The statistical likelihood of that happening are tiny. According to the Centers for Disease Control and Prevention, there are roughly 4,000 people in the United States with hemophilia B. You can make a rough estimate that less than fifty people live in Wisconsin with hemophilia, and that of those fifty, it’s likely that only about twenty-five are severe. I was absolutely shocked to find out that another little boy with severe hemophilia B lives on my street! 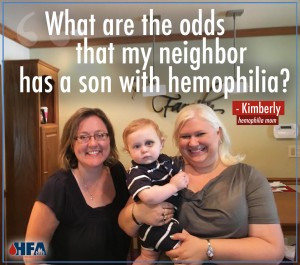 This ironic meeting at the clinic led to a lunch that Friday. We met at a local restaurant. Tara, her husband, and two children met up with me, Benny, and Jonnie. We had a lot to chat about and ended up drving back to our house and letting the older kids play in the yard while we continued our conversation. I was so glad I’d taken a vacation day and had plenty of time.
For a hemophilia family connection, it was utterly normal with all of the questions we all have when newly diagnosed! Will our child be bullied? Will he have friends? Childcare, school, ports, prophalyxasis, insurance… the overwhelming reality of life in our new normal.
I’m so happy to have had the opportunity to meet this new family that has literally been living just down the street from us! I ponder just how many times they walked by our house or we theirs without knowing! We look forward to introducing them to the support system we have nationally. And as time goes on, we’ll challenge them to also pay it forwrad for the next family.
Kimberly lives in Wisconsin with her husband, Howard, and boys Ben (13) and Johnny (11).
________________________________________
*Note: “Infusing Love: A Mom’s View,” is a blog collection of personal opinions and a representation of individuals experiences. While extensive efforts are made to ensure accuracy of the content, the blog entries do not represent HFA or its Board of Directors. The blog is also not intended to be construed as medical advice or the official opinion/position of HFA, its staff, or its Board of Directors. Readers are strongly encouraged to discuss their own medical treatment with their healthcare providers.