Thanks, But Not Now

HFA does not recommend, endorse or make any representation about the efficacy, appropriateness or suitability of any specific products, treatments, or opinions. Please consult your physician before use of any treatments.

We recently had Jackson’s six-month comprehensive visit at the hematologist. A comprehensive visit is an appointment in which many bleeding disorders specialists meet with you. The hematologist, dentist, genetics counselor, social worker, nurse coordinator and physical therapist all visit us in one appointment. These visits seem to take forever but I am truly grateful for the ability to see so many specialists all at one time. Jackson looks forward to his physical therapist the most. This is where he gets to move around, stretch, and they measure and track his mobility. He also likes his hematologist because they talk sports non-stop – football mostly. During the hematologist visit we talk about how Jackson’s current prophy therapy is working and also about new products, treatments and clinical studies that are on the horizon. A lot of people in our community are talking about gene therapy now and seem to be pinning their hopes on it as a possible cure for hemophilia. The thought of not worrying about bleeds, bumps, bruises, supplies, and monthly factor orders and insurance battles is enough to say, “Sign me up!” But why do I hesitate? 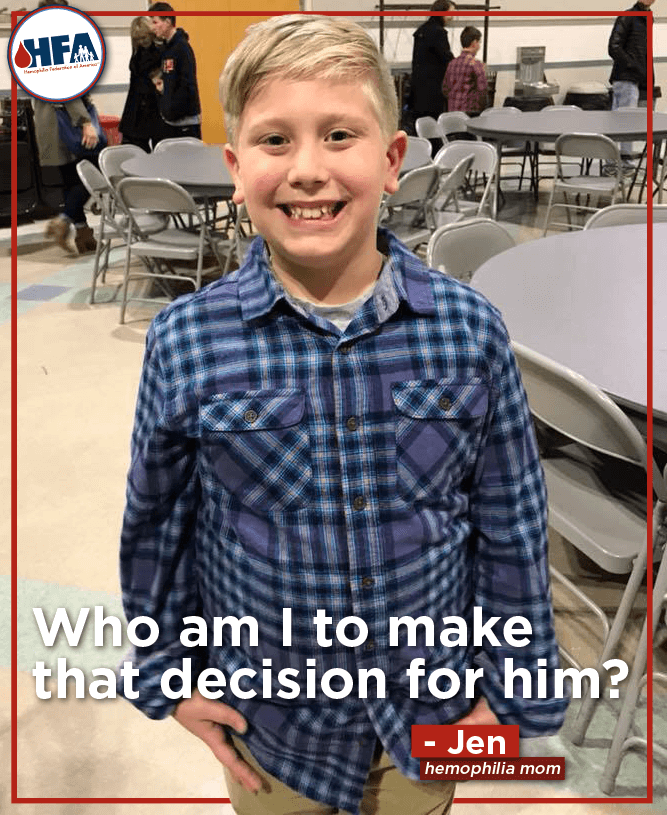 While I am not proficient in all the workings of gene therapy, it sounds like the gene therapy that is being talked about now appears to be effective for about 10 years, although it could be longer. As I understand, after the initial ten years is up you can’t use the same gene therapy again. In theory we could assume that another gene therapy would develop for an even longer treatment remedy…but what if it doesn’t? What if it’s ten years and done? You go back to worrying about bleeds, bumps, bruises, supply, monthly factor orders, and fighting insurance. Not to mention; what ten years do you chose?
I started thinking about the ten years I would choose for Jackson’s freedom from bleeds and bruises. He is 10-years-old now so ten years would get us through those high school “I’m indestructible” years and into adulthood. The more I thought about it the more it unnerved me. Who am I to make that decision for him? Would he resent me when he was 20 years old because I made that decision for him and his ten-year window of freedom has come to an end? Or do we wait until he is 18 and he makes that decision himself? It is so much to think about. So, I asked him, “Jackson, if you could be free of your hemophilia for ten years would you?” His reply was, “I would and wouldn’t. I would like a cure for hemophilia so that I could do things that I can’t do, like contact football but I wouldn’t cure hemophilia because I like being different from other people.”
I love the advancements in the hemophilia therapy we have seen in the past ten years. Jackson has participated in studies for long lasting factor and he is now reaping the benefits of this advancement in medicine. I am thankful that scientists are experimenting with therapy to ease the burden of people with bleeding disorders. I am hopeful that scientists will continue to push for advancements so that having a bleeding disorder is no big deal. I encourage and support it, however, with Jackson’s input, we are fine where we are now.
Jen lives in Ohio with her husband, Joe, and their three children: Evelyn, Nora, and Jackson.
*Note: “Infusing Love: A Mom’s View,” is a blog collection of personal opinions and a representation of individuals experiences. While extensive efforts are made to ensure accuracy of the content, the blog entries do not represent HFA or its Board of Directors. The blog is also not intended to be construed as medical advice or the official opinion/position of HFA, its staff, or its Board of Directors. Readers are strongly encouraged to discuss their own medical treatment with their healthcare providers.