The Other Side Effects

There are new bleeding disorder side effects cropping up all the time. By side effects, I mean the extraneous things we have to manage such as insurance, genotyping and product choice. In a time before all the advancements, a side effect was learning to be an IV nurse and find a vein on a toddler,Â  learning to be a physical therapist because of the amount of joint damage my son had at a young age, or knowing what a bleed looked like whether internal or external. As time went on, it wasn’t just for him but for me also. When there weren’t as many product choices, we just picked one. If it didn’t work well, we moved on. Now there are ports and extended half-life products, and gene therapy is finally on the horizon.
In some ways managing hemophilia was easier in days when there weren’t as many treatments. I know kids don’t bleed like my son did; they won’t suffer the debilitation of damaged joints and the risk of dependency on pain medications. I know there’s a better chance I’ll get proper care for my own bleeding disorder now. I also know when we didn’t have as many choices and I simply didn’t know about my own issues, life was simpler. I never questioned if something was a bleed with my son. If there was an issue, we just assumed it was and treated it accordingly. My own normal was one of bruising and excessive bleeding, because I didn’t know it didn’t have to be that way. I just lived my life.Â 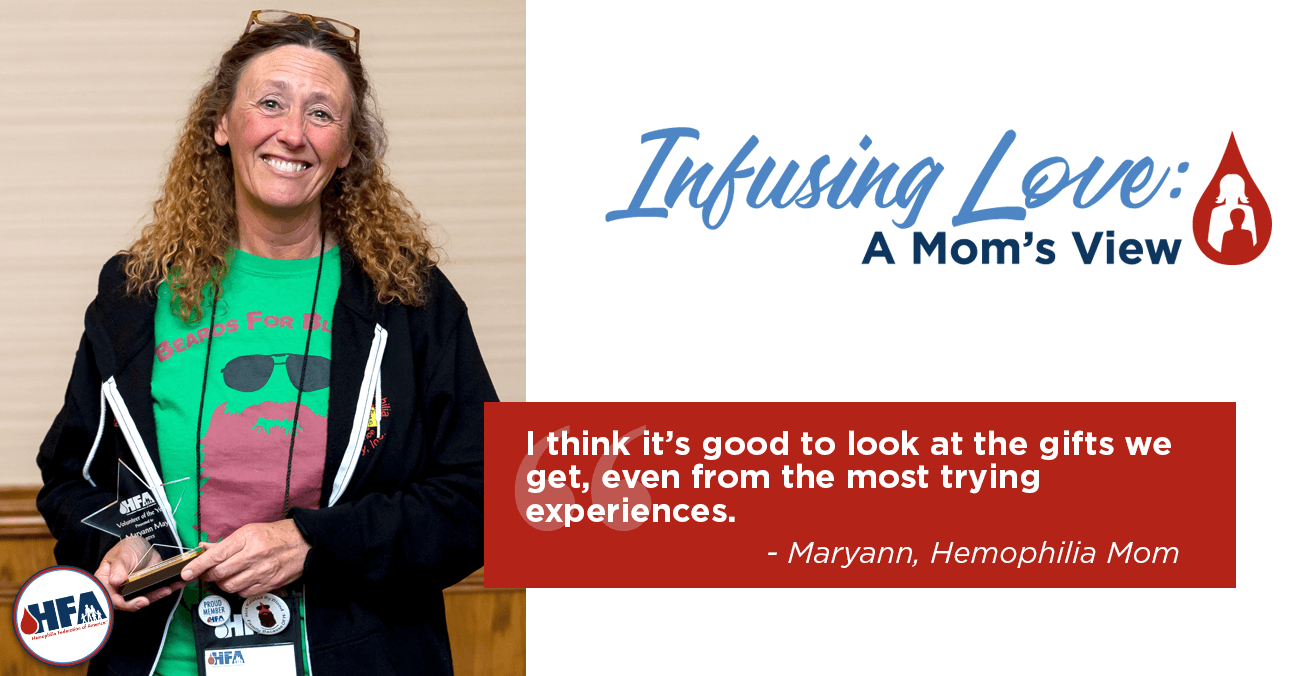 We always traveled with a travel letter for my son. This explained what and how much product he would need if there were an emergency on one of our journeys. In 2019 when I started a nomadic lifestyle, I had to get a travel letter for myself. It was odd for me to call the HTC and ask for one for myself, but because I am aware of some of the risks involved with my own low factor levels, I felt it best I have one in case of accident or injury. I’ll call it self-care. That to me is an example of a side effect.
Empathy is another side effect. I have always said, I don’t know what his pain feels like yet I tried to be empathetic, it kept me from fussing about minor hurts knowing his whole life was spent feeling some form of pain.
Last year I was moved from my Affordable Care Act (ACA) insurance plan to New Hampshire (NH) Medicaid because my income from Social Security is so small it costs the payers less to provide Medicaid than to cover the tax credit to keep me on an ACA plan. This means I can only get treatment in NH, so while I’m doing my cold weather stint away from New England I can’t just go to a doctor.
Well, I have arthritis in my knees, my right knee has swollen a large amount due to effusion (water on the knee). Insert empathy here, I can only imagine this is how a joint bleed in a knee feels. Because I won’t be back in NH for several months, I’m using the RICE (rest, Ice, compression, elevation) method. It works for the most part except I’m not good at the R part. The side effect, feeling what a joint bleed must feel like, feeling what being told to stay still feels like, that’s empathy.
I have a friend whose son uses and injectable medication for his hemophilia. Each week she posts his treatment. It’s been quite a process watching him go from struggling with fear that made the treatment take an hour or more to being able to inject himself and get it done in less than fifteen minutes. I was recently put on an injectable medication for headaches. I only need to do it once a month, but I decided that if my friend’s son can do it bravely, so can I. The first time I did it I sent a picture of the band aid on my leg to mom so she could show him and let him know he was my model, my example of courage. The side effect, he became an example for me without even knowing it.
There are many side effects of bleeding disorder – there are the ones we clearly see such as pain, becoming insurance experts and geneticists. Then there are the ones we don’t always consider like self-care, empathy and courage.
I think it’s good to look at the gifts we get, even from the most trying experiences. Those of us that live with or around chronic disorders have the grace to see more, experience more and use more of the side effects that aren’t listed on any description.

Maryann and her adult son, Max, live in New Hampshire
*Note: “Infusing Love: A Mom’s View,” is a blog collection of personal opinions and a representation of individuals experiences. While extensive efforts are made to ensure accuracy of the content, the blog entries do not represent HFA or its Board of Directors. The blog is also not intended to be construed as medical advice or the official opinion/position of HFA, its staff, or its Board of Directors. Readers are strongly encouraged to discuss their own medical treatment with their healthcare provider.