Infusing Love: The Thief of Joy

Some of the best sessions I have attended at conferences have been rap sessions. These sessions bring together certain sub-groups in the bleeding disorder community and allow them to have open conversations, asking questions and sharing information with each other. At one rap session, many years ago, a mom in the parents rap session was talking about a new treatment for inhibitors that involved a chemotherapy drug. I remember thinking, “She must be crazy! I would never do that!” I found myself looking for her contact information a few years later as my husband and I were considering the same therapy. With a crazy inhibitor I quickly learned, “Never say never.” We ended up going through with the treatment and it worked beautifully. Caeleb’s inhibitor finally made it to double digits. I never dreamed hearing that his Bethesda level went from over 200 to 95 would be so exciting. 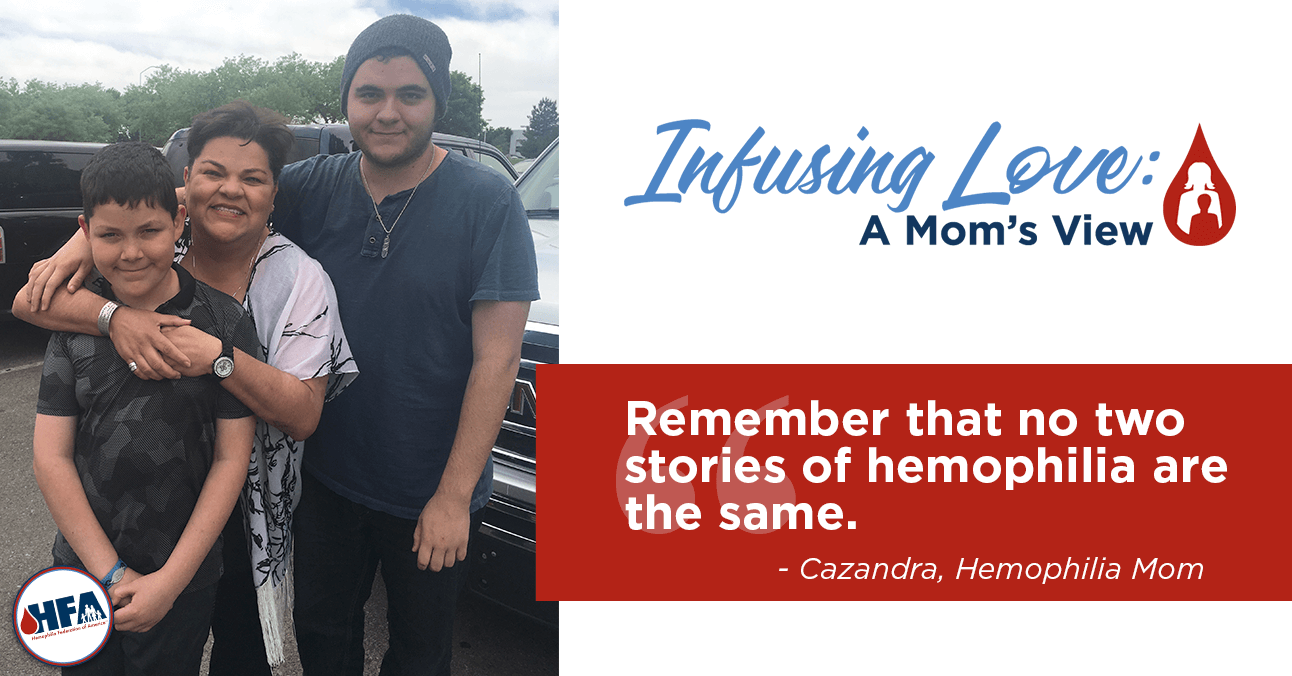 Sometimes in rap sessions, workshops, meetings and other types of gatherings, I discovered an odd thing happening…comparisons. In one session, a mom was talking about her son’s second port, and another mom quickly chimed in with her experience because her son had three ports. It was as if she was trying to win. Throughout the session when other topics came up, the same thing continued to happen. It was almost as if, in this particular group, the parents wanted to make sure everyone understood that their journey was worse than everyone else. And then I started to understand…they wanted to be heard.
When you live with a rare, chronic disorder, there are not many people in your daily life that understand the challenges you face. Fortunately, we can go online and find our bleeding disorder family easily via social media and find support that we do not necessarily have in our “blood” relatives. Attending local, chapter meetings and national conferences allows our community to come together and feel a connection that may be missing in their lives. And all of a sudden, people who truly understand the obstacles that we face every day are in arms reach.
My sons have very different stories. My 21-year old, Julian, had an inhibitor for three years, one port and no major joint bleeds to date. Then there is my mighty warrior Caeleb. He is almost 12-years old (article published in 2017), with two target joints, has lived with an inhibitor for eleven years, is on his seventh port, developed PTSD, had needle phobia, was in a wheelchair for over a year, spent the better part of a year in the hospital, and developed an allergy to Factor VIII. Very different indeed. I guess you could say my Caeleb is one of the more difficult cases with hemophilia and an inhibitor, but Julian’s struggles have been very real. I cannot compare the two because they are so different, and they have affected each of my son’s. It hasn’t mattered how difficult the journey, it has mattered how they have dealt with each bleed, each hospitalization and each infusion.
People have come up to me to talk about their experiences with their bleeding disorder and they feel as if they must put a disclaimer to their story. “Cazandra, my son’s inhibitor is really bad, and we are struggling, but it’s not nearly as bad as Caeleb’s…” That is when I immediately stop them and say, “Wait a minute. This is not about comparing circumstances. This is your journey. It’s not about whose story is worse than the other’s.” I think this is extremely important for people living with chronic illnesses to understand. There is always someone who is in a worse situation, and it doesn’t mean that your story is less than.
Theodore Roosevelt said, “Comparison is the thief of joy.” I fall into the comparison trap often and every time I do, I realize that I am robbing myself of joy. Joy is something that we can find when things are going well, but we can also find it when we are in the middle of the “worst of the worst” if we look hard enough. Learn what you can from others and their journey with a bleeding disorder. Remember that no two stories are the same.

Cazandra lives with her husband Joe, and sons, Julian and Caeleb, in New Mexico.
*Note: “Infusing Love: A Mom’s View,” is a blog collection of personal opinions and a representation of individuals experiences. While extensive efforts are made to ensure accuracy of the content, the blog entries do not represent HFA or its Board of Directors. The blog is also not intended to be construed as medical advice or the official opinion/position of HFA, its staff, or its Board of Directors. Readers are strongly encouraged to discuss their own medical treatment with their healthcare providers.