A Bleed and No Money

I am a single mom with two sons with mild Hemophilia B.

We receive public assistance through a state program and the eligibility requirements include 20 hours of community service each week. Normally, my sonsâ€™ hemophilia is controlled but one day my 10 yr. old son received a cut on his finger. I bandaged it and all appeared to be fine until the next day when his finger split open and began bleeding heavily. With factor in tow, I took him to the local emergency room. 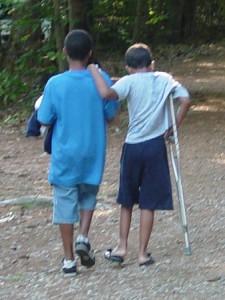 Despite my insistence to infuse, the doctor in the emergency room said it was not necessary and told me the stitches would control the bleeding. I protested, reminding the doctor, about my son having a bleeding disorder, but he refused to listen. The next day, the bleeding continued and his stitches popped open. He developed a marble size hematoma on his middle finger. Not wanting to experience a similar situation at the ER, I took him to the hemophilia treatment center. The center infused him and then I took him straight to the emergency room.

We waited for hand specialist to perform surgery on my son. After 2 Â˝ days in the hospital, we finally got to go home. I wish I could have taken him to the treatment center from the start, but the distance and her lack of funds for gas money, prevented me from doingÂ so. I tried to maintain my community service during my sonâ€™s bleeding episode, but ended up missing three hours. My benefits were cut for the month, which caused me to miss my electricity bill payment and subsequently my lights were cut off. Helping Hands paid my bill and my electricity was restored. I also have worked with my hemophilia treatment center social worker in order to restore my benefits.

I am actively searching for a job in hopes to increase my income and become self-sufficient in the future.