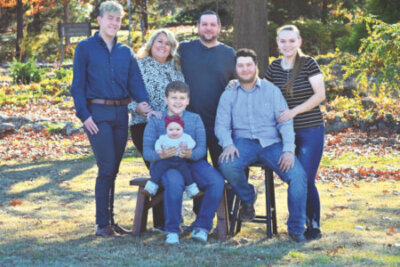 By Risa Kerslake, Freelance Writer
Kristin Voyles didn’t know growing up that she had von Willebrand disease (VWD). Looking back though, it made sense. She bruised easily and had heavy periods. “At 18, I had bursitis in my shoulder as bad as an almost 80-year-old,” she said.
Voyles is now 43 and living in Broken Arrow, Oklahoma, with her husband and children. Both she and her husband have type 1 VWD, and her youngest son has type 3. The search for answers for her son’s excessive bleeding after circumcision began at five days old.
“That’s when my anxiety started,” Voyles said. “I just put up a wall and didn’t know what to think. I was scared to death.”

Her son was six months old when he received a diagnosis. Voyles and her husband were tested next. Looking back, she remembered that both her paternal grandfather and dad hemorrhaged after being diagnosed with cancer. Her father died soon before her son’s diagnosis.
“We didn’t hit that diagnosis in time to save my father,” Voyles reflected. Not only was she in disbelief, suddenly finding herself with a bleeding condition, but her son had one too. “It was devastating, knowing that we’ve changed my son’s life forever.”
Voyles opted to have a hysterectomy to control her heavy periods. She has arthritis from years of no treatment for a condition she didn’t know she had. “I haven’t had to take a lot of factor,” she said. “If I have surgeries I’ll have to treat, but I’ve been pretty lucky.”
Traditionally, the bleeding disorders community hasn’t focused on women and the unique symptoms and complications they can have. Many women go years without proper diagnosis, sometimes being told their excessive menstrual bleeding is normal. Fortunately, there have been strides in the medical community that have given more recognition to women with bleeding disorders in recent years. With this, comes more opportunities for women to get diagnosed-and treated-earlier, share their stories and empower others to advocate for themselves and their families.
Challenges in Diagnosing
For Rachael Robinson, 53, of Owasso, Oklahoma, her Factor 13 carrier status was a surprise as well. She had heavier periods growing up but didn’t think it was abnormal enough to tell her doctor. “I never had nosebleeds, but I do bruise easily,” she said.
After an uneventful birth, her son experienced bleeding complications after his circumcision. They saw a pediatric urologist and there was talk of a possible bleeding disorder, but testing was never done.
As her son grew, he bruised and had a lot of bumps under his skin. Several times she’d take him to the local pediatric hematologist only for her concerns to be dismissed. Factor assays, timed bleeding tests, platelet aggregation-all of them were normal, but only because Factor 13 wasn’t included.
The family was sent to a bleeding disorder center in Oklahoma City when her son was five, where he was finally diagnosed with severe Factor 13 deficiency. Robinson and her husband were never tested since it was implied both of them were carriers.

Growing up, Leisa MacDougall, now 43 and living in Enid, Oklahoma, had no idea it wasn’t normal for her menstrual cycle to last more than two weeks. Her mother always told her they were a family of bleeders. It wasn’t until MacDougall’s son, Jayden, was four years old and had tonsil surgery that there was a concern, as he was still bleeding 10 days post-op.
After being cleared by the surgeon, MacDougall’s son made two visits to the emergency department for vomiting blood and for a 3.1 hemoglobin level. The surgeon asked MacDougall about a family history of bleeding disorders; in his 40 years, he had never had a child bleed like that, he told her.
But, according to MacDougall, her son’s pediatrician refused to run tests, stating they were not necessary. MacDougall’s surgeon was the one who referred the family to the Jimmy Everest Center for Cancer and Blood Diseases in Children in Oklahoma City. That’s where her son was diagnosed with VWD type 1 and mild hemophilia B. MacDougall and her mom were also diagnosed: Her mom had mild hemophilia B, and MacDougall had type 1 VWD and was a hemophilia B carrier.
“It felt wonderful to be validated,” MacDougall said. Like others diagnosed later in life, she could look back and see the patterns. As a child, she remembered pinching her nose closed during a bleed for what seemed like hours. “There have been occasions as an adult where I have nosebleeds in the middle of the night and wake up with the pillowcase soaked.”
Sarah O’Brien, MD, a pediatric hematology-oncology specialist at Nationwide Children’s Hospital in Columbus, Ohio, often finds frequent nosebleeds are a part of a woman’s history with bleeding disorders. But because nosebleeds aren’t that rare, the bleeding disorder isn’t often caught at that stage, she said. It isn’t until adding in heavy menstrual bleeding that the picture begins to emerge.
“We know that there can be delays in diagnosis for both men and women with bleeding disorders,” she said. “One huge barrier is not enough women recognize what is or isn’t a normal menses.” It’s not something often taught, unlike the extensive education new parents get bringing a baby home from the hospital. By the time that baby is a teenager, neither parents nor teenagers may know the signs to watch for.
Health care providers also don’t often know the questions to ask. The only question a woman might get from her doctor is if her period is normal or if there are concerns. According to O’Brien, providers should be asking more specific questions, such as how many days a period lasts, if they’re going through more than four to five pads a day, or if they’re getting up at night to change a pad. “If a patient answers yes to any of those questions, it’s a red flag there may be an underlying issue.”
Robert Sidonio Jr., MD, a hematologist and associate professor of pediatrics at Emory University in Atlanta, said there is a shortage of hematologists with the expertise to perform a workup for a bleeding disorder and properly interpret the results. There are good providers in every state, but many people, especially in more rural areas, have no choice but to drive long distances to find one that understands the complexities of their condition.
Sidonio explained that the hematology field is trying to shorten the gap from bleeding symptom to diagnosis, but “we need to do a better job at educating primary care and emergency room doctors, possibly with a lecture series.” After all, they are the ones on the front lines for heavy bleeding episodes and a person’s entry point into bleeding disorder specialty care.
Being Told ‘It’s Normal’
Tammy Jones, age 61, of Greenwood, Arkansas, lived with heavy bleeding from her first menses into her early 30s. She and her four daughters have VWD. Bleeding-from her nosebleeds and bruising, to her heavy periods-wasn’t talked about when she was younger. Then, after the birth of each of her children, she bled much longer than she thought she should.
“At my six-week check-up I was still bleeding,” Jones explained. “I would nurse the babies and I would have gushes.” Once, after nursing her third daughter, she stood up, and “blood just went everywhere. I screamed, my husband came in, and we called the doctor.” Get in the shower, she was told, elevate your feet. It’s normal.

When she was 34, her doctor brought up the idea of a hysterectomy. Jones wasn’t ready.
But by the time the next year came around, she could hardly function. “I couldn’t leave the house because I would bleed through a tampon and through doubled overnight pads and onto my clothes.” When she went back to her appointment, she agreed to the surgery.
Afterward, she became depressed. “We’re brought up and taught that our bodies are made for having children, and [after] that was taken away from me, I had a really hard time,” she said.
When her third daughter started having frequent heavy nosebleeds, she was sent to the children’s hospital. Jones requested testing for herself and all her daughters. They were all diagnosed with moderate Type 1 VWD.
After that, Jones’ daughters each dealt with their own bleeding episodes and complications with heavy periods and hysterectomies. “I see my children not being able to have children because of this bleeding disorder,” Jones said. “It’s very hard because I go back to the fact they got this from me.” Still, she said, her goal is to make sure her kids and two grandchildren don’t struggle the way she did growing up. A grandson was also diagnosed with VWD.
Getting connected with organizations such as HFA can provide education and support. When her son was seven months old, Voyles became involved in HFA. She read everything she could on VWD. “If HFA had an article
come out, my husband and I were reading it.” While her son’s condition has leveled out in the past few years,
the past decade was rough. She is thankful for the support she had.
That connection helped MacDougall cope also. HFA provided an opportunity to learn more about VWD and hemophilia B, she said. “It’s just one of the most wonderful tools in the world to be connected with other people that have the disease that I have.”
Jones agreed: “The advocacy is so important for healing because it empowers you to be able to move forward and help others. We can’t stay in that anger zone or that depressive state thinking, ‘I have this and I passed it to my children.’ How much better can their life be if I advocate for this, if I work with organizations in my community?”
Treatment Trends
HFA works to stay on top of the latest research in VWD and other bleeding disorders. According to O’Brien, more women are deciding to go with an intrauterine device (IUD) as a first-choice treatment option. IUDs are long-term, reversible contraception placed inside the uterus. “In general, IUDs work best compared to birth control pills in reducing bleeding,” O’Brien said.
Doctors are working to break down barriers to IUD treatment, to make them more accessible to younger patients and provide education on misconceptions. “There are concerns IUDs affect your fertility or they can only be used if you’re sexually active-or they’re associated with infection. [But that] isn’t the case for IUDs on the market today,” O’Brien said.
In many pediatri c hospitals, young patients can be placed under sedation for the IUD insertion. “That removes the barrier of a patient being scared to have a pelvic exam,” she explained.
Sidonio said some situational prophylaxis can be used for menstrual bleeding, but it’s not for everybody. “There’s a role for factor concentrates in heavy menstrual bleeding, but women and girls should consider hormone therapy and antifibrinolytics as the first-line therapy unless there are contraindications.”
If those don’t work, menstrual bleeding factor prophylaxis can be considered. “We have a national study called ATHN 9, and it’s focused on severe and clinically severe VWD,” he said. The study is examining the use of von Willebrand factor (VWF) concentrate for various situations, including nosebleeds, joint bleeds and heavy menstrual bleeding. VWF can be a consideration if other options have failed or hormone therapy cannot be used, he said.
“I try to look for the positives,” Jones said. “The answers are getting better. The care is getting better. All the new things that started this year from my advocacy are mind-boggling, and I’m so excited.”