Micah will be 14 years old in just a couple of months. He has severe hemophilia A, no inhibitors, and has been on prophylaxis since he was just over a year and a half old. So, for roughly twelve years, he has been on a very strict prophylaxis schedule dosing three or four times a week. He has been on four different recombinant products and is currently on his first plasma-derived product. We got too comfortable with prophylaxis. In the last couple of weeks, we have been reminded of underlying issues with joint damage and what it takes to heal.
In October of 2014, Micah was goofing around and jumped off of a stair riser at choir practice. It was maybe two feet tall. This happened on a Thursday, but he didn’t tell me about it until Monday. By this time his ankle was double, maybe triple, the size it should have been. He was clearly having a bad bleed, even though he did infuse before the injury. When I had asked him how he did it, at first he said he didn’t know. Then when we talked things out and he remembered his jump four days prior. But he said, “It didn’t hurt, and it was no big deal. I didn’t feel it twist or anything.”Â  But obviously it didn’t take much to cause damage. That little jump put him in a wheelchair for over a month, caused him to take factor daily, and regularly use a Cryo-cuff, RICE therapy, and various wraps to control the bleed. 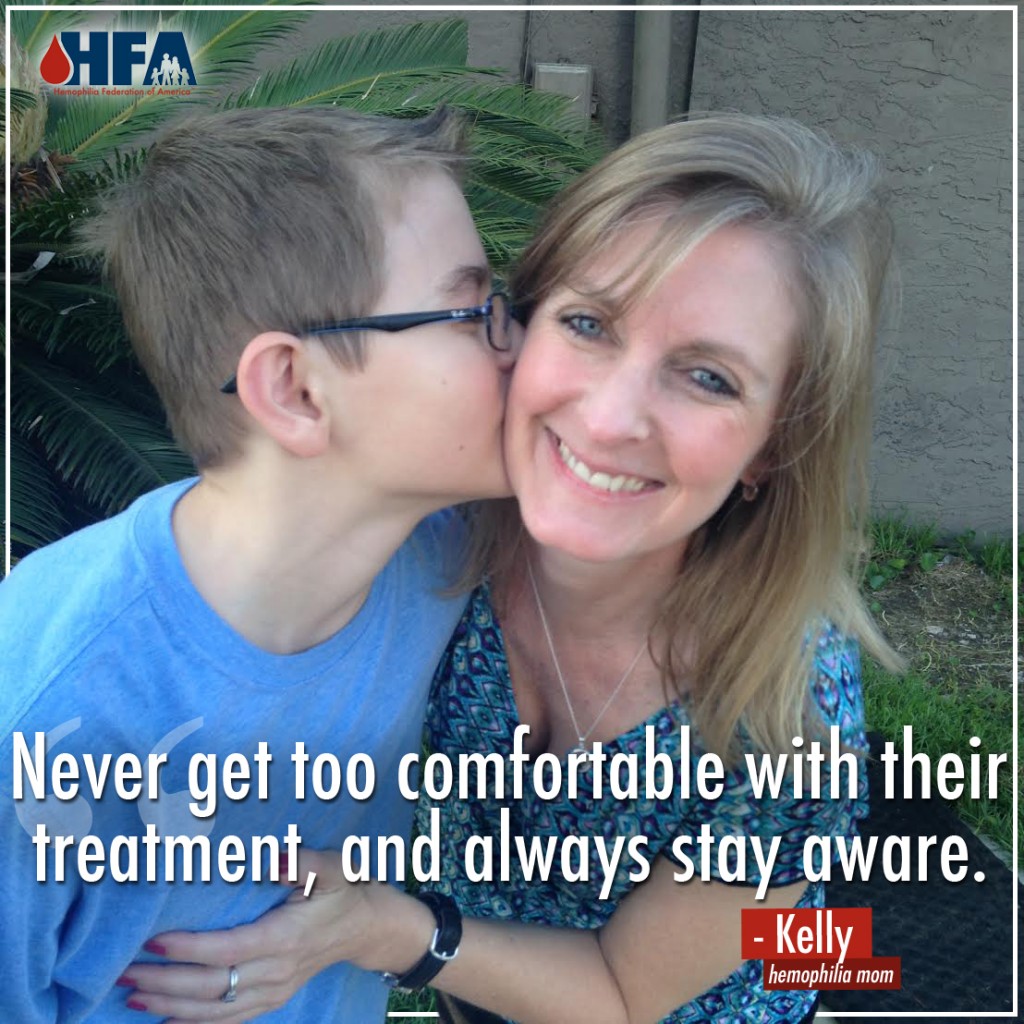 During this time, I switched to a new HTC for a second opinion. The new hematologist agreed there was something more going on and ordered Micah an MRI of both ankles for comparison. When the results came in, we were truly shocked. Even with a very religious prophy schedule, Micah had apparently been having numerous micro bleeds in his ankles that he didn’t even know he was having. Based on the MRI results, he was also diagnosed with degenerative bone disease. One ankle is already thinned to where it is almost rubbing bone-on-bone. The other has bone growth overlay from calcium deposits that have started causing his ankle to turn in when he walks.
I asked the hematologist “How does this happen when he has stuck to his infusion schedule?” The doctor’s response was that sometimes while recombinant products are wonderful for some, others really need the plasma base to be more effective. I also wondered why he didn’t complain of pain. She informed me that he didn’t know the feeling of normalcy in his ankles because he had lived that way his entire life. The doctor also commented on his very high pain tolerance, which, according to her, is not unusual for hemophiliacs.
We came into this community just as recombinant factors were rolling out, and we were preached to that it was the safest and best way to go. However, not every person responds to these products the same way. I wish I knew then to check for inhibitors and to push my HTC to do a half-life study. Micah’s half-life was usually half of what it should have been. His body just metabolized factor much quicker and it took seeing the MRI to realize the after effects. Micah switched to a plasma-derived product a few months ago and had been doing well.

Be Aware and ask questions: Don’t be afraid to look your kid over and drive them nuts with questions once they become a teenager. Also, remind your kids that sometimes, even the slightest injury can have a huge impact whether it hurts or not. It’s something to watch for in the coming days and if you know, you can start treating ahead of time to prevent a bad bleed from turning into a much longer recovery or permanent damage.
Be informed: If you feel your child’s bleeding isn’t controlled, ask about inhibitor testing and other lab work like half life and recovery studies. Stay on top of bleeding and treatment so that your child can protect their joints.