Infusing Love: Taking Care of the Patient & the Caregiver

I don’t think I’ll ever forget the day I got the phone call — the one I had been dreading since my daughter was diagnosed withÂ Platelet Storage Pool Disorder (PSPD). It was 10:30 AM on aÂ Thursday. I was singing to the preschoolers where I work when my colleague brought me the phone. She had that look on her face–you know the one — I’m so sorry! It was Scarlett’s school. I knew she must be hurt.
I immediately stopped what I was doing and reluctantly took the phone, frightened of what I was going to hear on the other end. It was the principal. “Kari? Scarlett hit her head. She ran into a pole in the hallway.” She went on to explain that she hadn’t seen Scarlett yet, but that the impact left a bump on her forehead the size of a golf ball and the aide was rushing her down to the office. I told the principal I was leaving immediately and to go through the R.I.C.E. protocol. I picked up my purse and ran out the door.
The ten minutes it took to get to my daughter’s school seemed like forever. The whole time I was secretly convincing myself over and over again that she was going to be just fine; that the panic I heard in the principal’s voice was just the fear of the unknown, and when I got there it wouldn’t be that bad. The second I walked into the nurses office and saw Scarlett’s poor little face, now with a baseball size hematoma on her forehead, I knew this injury was different. I had her on my lap and sprayed her Stimate into her nose before I think anyone even knew what was happening.
This was our first experience with a head injury. We watched her closely for a couple of minutes, and because she was showing no signs of a concussion, I was feeling confident that she didn’t hit her head that hard. I took her home, and called her pediatric hematologist to explain what had happened. Her bruise was getting bigger and darker and it had been over 20 minutes since I had given her medicine to her. They responded by saying we needed to go to the Emergency Room immediately. They told me that they would be calling the hospital to inform them we were coming and what protocol they were recommending. I grabbed her emergency bag, gave my husband and son a kiss and prepared myself for what I thought was going to be a long afternoon.Â 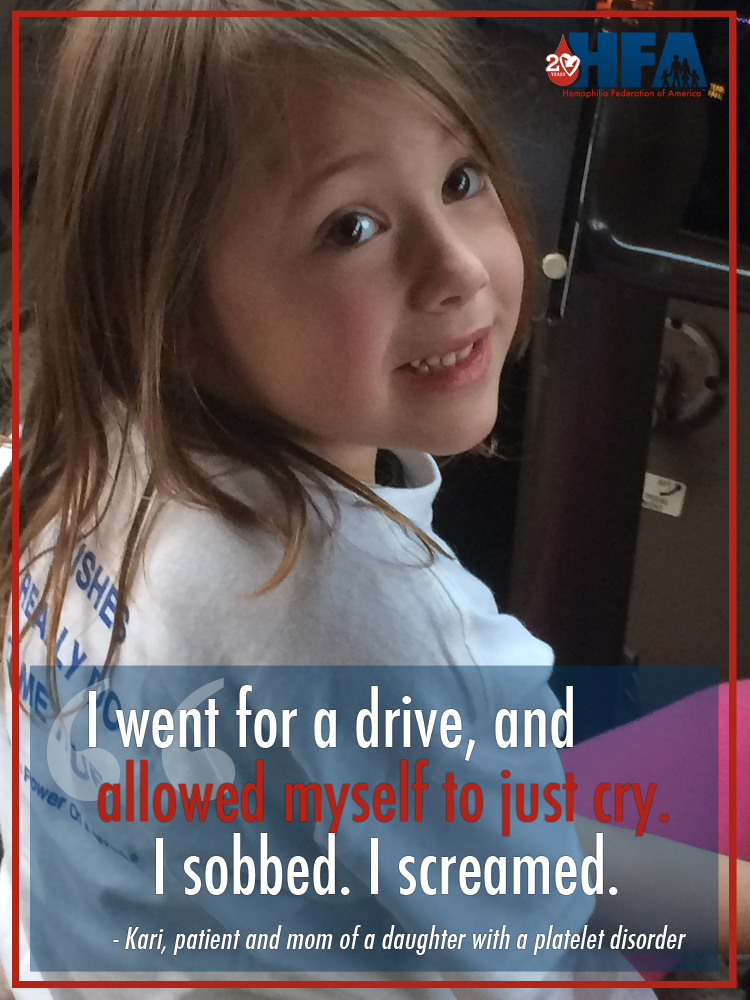 In actuality, the trip to the ER went fairly quickly. We were rushed through admissions and Scarlett had a CT scan by 12:30 PM. We were released by 2PM. I walked away feeling confident that the worst part was behind us. Everything came back clear with the CT, so we thought she was on the road to recovery. But it was what happened the following evening that sent me into a tailspin and eventually pushed me into a nervous breakdown!
Scarlett and I were going through our normal nighttime routine and were in the middle of reading a book. She looked at me, stated that she didn’t feel good and then I watched the color drain out of her face. She said she was tired, that her stomach hurt and she needed to go to the bathroom. I followed closely behind knowing something wasn’t right and as soon as she sat down on the toilet she began to throw up more blood clots and blood than I have ever seen before. It covered the floor. I was on the phone with the pediatric hematology department within seconds and silently mouthed to my husband to keep her calm and start washing her up. I knew that we were probably heading back to the ER.
After a long conversation with the on-call doctor, I was assured that Scarlett must have had a sinus hemorrhage and was swallowing so much blood that it eventually caused her to throw up. The head injury she had the prior morning had nothing to do with the blood she was swallowing. She apparently had two completely different bleeds, happening at the same time. As they advised, we kept her calm, gave her another dose of Stimate and kept a close eye on her for the duration of the weekend. Mind you, based on the fact that PSPD is so rare, every time a doctor gives us a diagnosis or advises us on treatment, in the back of my mind I’m always questioning if they really know what they’re talking about. There are so few cases to base anything on, and it’s hard to trust that we are taking all the right steps and precautions. But, even with all the doubts I’ve learned to listen to the doctors, use my own common sense, and remember they are here to help us out, so I went along with their advice.
By the time I went to bed on Sunday night, I felt emotionally, spiritually, and physically exhausted . I had been on a roller coaster of emotions and was starting to suffer from anxiety attacks because of it. However, I was hopeful that my daughter was getting better and felt like the scary parts were over. But, when Monday morning rolled around and it was time for Scarlett to get up to face the day she looked very pale again and seemed very fatigued. Mother’s intuition set in and I instantly got someone to cover my shift at work as I prepared for another day at the doctor. I emailed her local pediatrician and spoke with her hematologist; we decided a routine check up and blood count needed to be taken ASAP.
I had Scarlett in and out of her local pediatrician’s office by mid-morning and was again hopeful the tough parts were behind us. It wasn’t until I got the call that evening at work, that I realized how wrong I was. Her blood count was down — extremely down. She was anemic and needed to be put on iron right away. She would be tested the following week and we would go from there. It was obvious to everyone that she had lost a lot of blood and hard to believe it was all coming from her sinus bleed.
Her hematologist stressed that even with all of the trauma it was good for Scarlett to go on with her normal routine, so she returned to school the following day. Despite her countless restrictions, a new aide, and a little fear, she was bouncing back quickly and seemed to be ready to be back at school. However, in the following few days I started to take a turn for the worst.
I had reached my boiling point. Everything that was happening with my daughter had my nerves in an uproar. I had flu-like symptoms for two days, constantly felt like I was on the verge of a heart attack and then, I just kind of lost it. All week I had been having what I now know were complete anxiety and panic attacks. I felt like someone was sitting on my chest, like I could never catch my breath. I was exhausted emotionally and physically and felt like I was having a nervous breakdown.
I made an appointment to see my doctor and when she walked into the office I just broke down.Â I had tried to remain so strong the whole week that I don’t think I had even cried or processed what had happened. This was the first time I had been alone in a room with someone since I got the phone call that Scarlett had hit her head. I just let it all out. The doctor responded by giving me three different prescriptions, and she told me I was depressed and was suffering from exhaustion, and panic disorder.Â 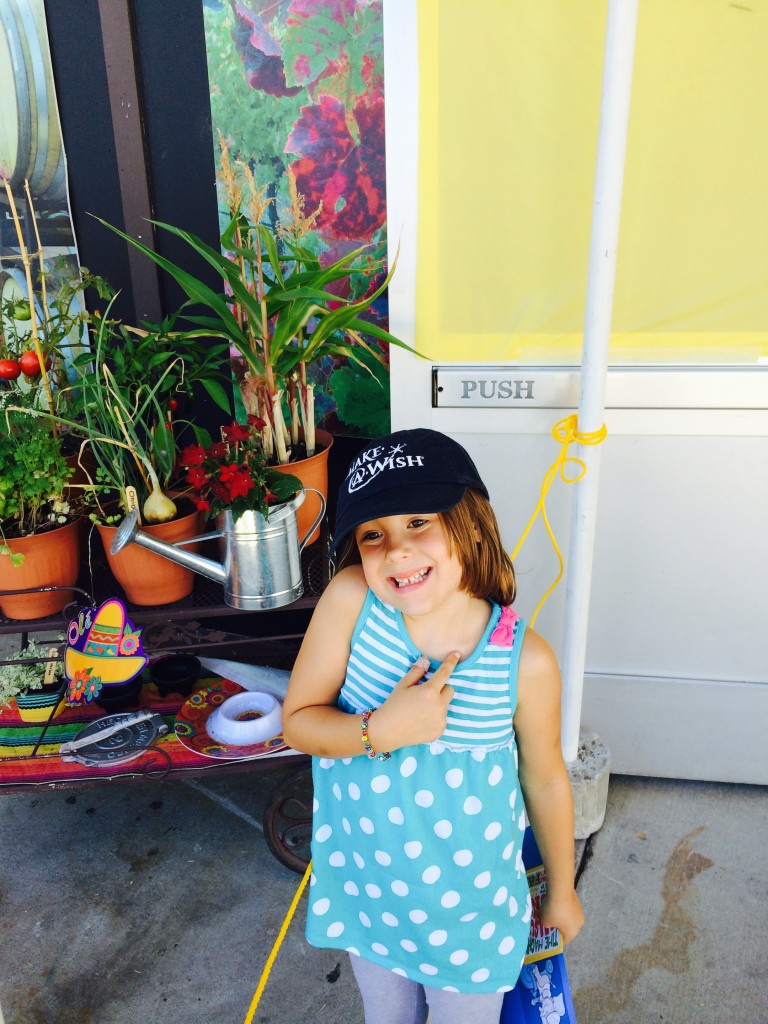 I walked out of the office feeling defeated and that PSPD had won. I literally was having a nervous breakdown because of all of this. I went for a drive and allowed myself to just cry. I cried for five years of worry, anger, anxiety, and fear. I sobbed. I screamed. I vowed to make some changes and then I took the deepest cleansing breath I could take, wiped my tears and decided to not let this break me.
I’ve never been one to jump at the chance to take prescription pills and usually have an adverse reaction to any that I’m forced to take. I took a half of one of the sleeping pills on that first night and I couldn’t hear my two year old when he woke up. I ended up not taking any more after that.
But my panic attacks were still happening so I tried the anti-anxiety pills several different times.Â They are supposed to have an instant effect, which I didn’t get, so I opted to not take those anymore, as well. A personal choice for me and by no means a judgment on those that do, butÂ I never started taking the antidepressants either.
I felt like I could look within and make a handful of life decisions that could change my anxiety level, without instantly having to go on sleep meds, anti-anxiety pills, and antidepressants. I was determined I could do this on my own. I promised myself that if after making some major changes I still felt like this one month later, I would re-evaluate the situation again. Then I did what I do best – I reached out to my buddies, family and friends and decided I needed to make some changes, starting with a break. Everyone I talked to said that I just needed to get away.
Scarlett’s bleeding disorder brings on so much additional fears and worries and I need to find ways to process that. I had a spa day, caught up on some sleep and booked a long weekend getaway with my hubby. I sat down and wrote all the things that stress me out and ways in which I can alleviate some of that stress. I agreed to seek counseling and start focusing more on me, so that I’m always in the best state of mind possible when it’s time to face the trials and tribulations of having a child with a bleeding disorder.
It’s been a little over a month since the day I broke down and we’ve made some big changes in our household. I’m honestly working on it every moment of every day. Scarlett is back to her old self, but seems to have learned from the whole experience. She finally understands why everyone has been trying to prevent her from hitting her head and is starting to realize the importance of making safe choices more and more each day. I’m slowly starting to feel less stress and am learning to manage what does come along. I have faith that each bleeding episode brings us closer to understanding this disorder and finding the answers.
The more we share our experiences and lend support to one another, the easier the load seems to bear.
Kari lives with her husband, Ryan, and 6 year old daughter, Scarlett, and 2 year old son, Walker, in California.