I was starting to get Ryan, my youngest, ready for bed while Logan hovered around us. Logan loves Ryan, and wants to be near him always. It is incredibly sweet. But on this particular day Logan was paying close attention to Ryan, and after a few moments Logan casually asked, “When does Baby Ryan get his port?”
I swear I stopped breathing. Everything in the room went fuzzy. A thousand answers raced through my mind. I never expected to have this conversation so soon; I was wrong. I should have been prepared. But, in my head, I countered, “How do you even prepare for this?”
I could not run away from this one. Logan was touching the spot on Ryan’s chest where a port would go, and looking at me. While grasping for straws I thought that honesty was the best option. Logan remembers everything — often times remembering things I hoped were forgotten.Â  So, I nonchalantly replied, “Baby Ryan does not need to get a port.”Â  I eyed Logan’s response, wondering if would he ask additional questions. He didn’t. He just said, “Okay,” and bounced out of the room. 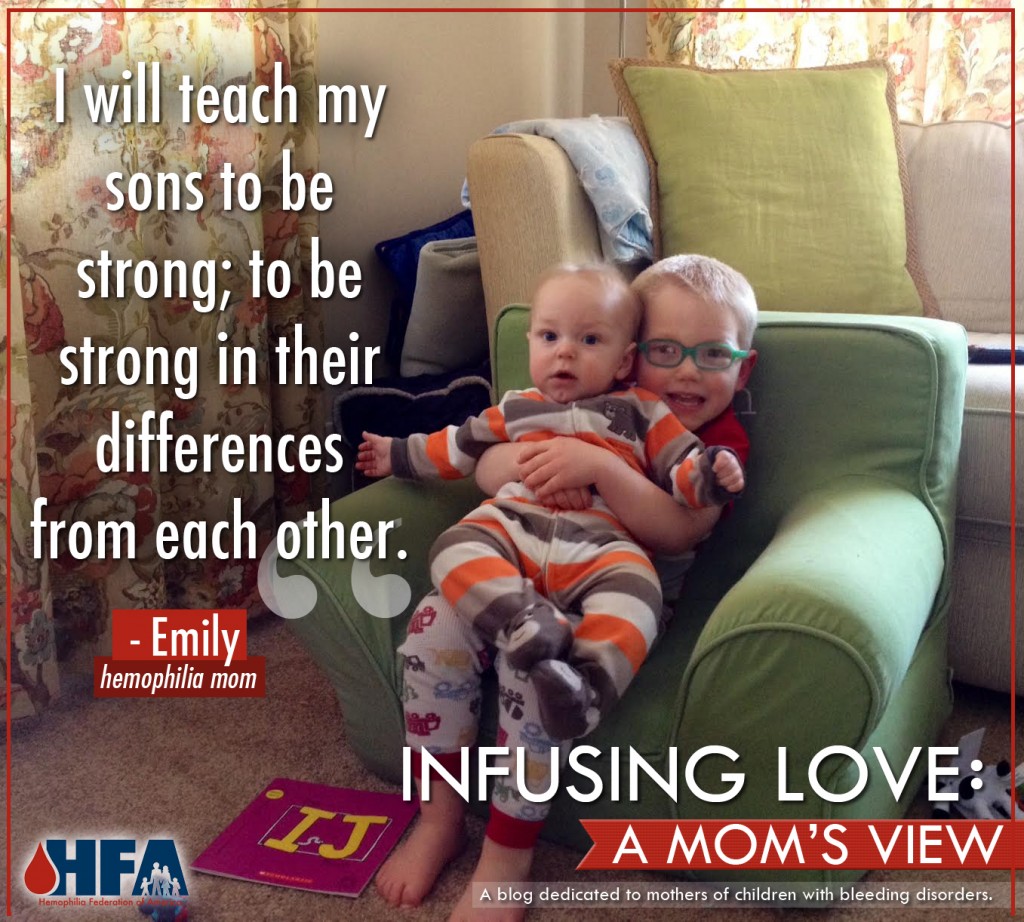 Logan has asked similar questions since then, however he never seems to be too interested in asking more questions. I guess I should be using this time to formulate a well-thought out answer when they come, but, honestly, these conversations cut deep into my heart.
I am a carrier. I am the mom of two boys: one with severe hemophilia and one without. My husband and I made the difficult decision to have another child knowing the risks. Part of that decision was based on the assumption that all of our children would have a bleeding disorder. It provided a sense of control over an uncontrollable situation.
My husband and I had many conversations about life with two boys with hemophilia. The added stress, the medical expenses, and even the everyday issues of where will we put more factor supplies! At our anatomy scan while I was pregnant, it was very clear that we were having another boy. He was beautifully wiggling around on that screen. All of a sudden, the discussion of life with two was given an added does of reality. Again, we resolved that this baby boy had hemophilia.
Ryan joined our family in the wee-hours of the morning, and after confusion among the nurses, the lab and our HTC, I received the results: No hemophilia. I don’t think I was excited or sad. I was overwhelmed. I needed to readjust what I had anticipated.
I had envisioned the boys being in it together. Â But I had not envisioned what it would be like to raise one with and one without. Hemophilia was the only way I knew how to parent.Â  It was in those thoughts that I tried to remind myself that when Logan was born I did not know how to parent a child with hemophilia and I am slowly walking that road.
Yet what broke my heart shortly after Ryan’s birth were the excited responses to his normal clotting ability. When I heard that God had answered our prayers, the often-cited “praise God,” or comments declaring that our life would easier with only one son with hemophilia, I smiled and changed the subject. Â But deep down, I felt like people’s excited responses were more about Logan having hemophilia than Ryan not. It has been the biggest blessing that Logan was as young as he was and does not understand when people are glad of Ryan’s lack of diagnosis. The last thing I want to do was try to explain to my sweet three-year-old why people think it is so wonderful that Ryan doesn’t have hemophilia. But at the same time, I wanted to scream at people, “There is nothing wrong with Logan and it does not matter whether either of my boys can clot!”
At the same time this has been such a clear picture of what life may be like as Logan gets older.Â  I will have to explain to the sweet face that most kids don’t go to the doctor every month, that they don’t know the ER nurses or that his brother will never need a port like he does.
I know I am still learning.Â  And I know that Logan’s questions will just get harder and harder to answer. But right now I will keep being honest. I will answer his questions head on because he needs me to answer those questions and to reassure him. I will take the brunt of people’s comments and questions and along with that I will teach Logan to be strong; to be strong in his differences from his brother.
For now (or for the time being?), he needs me to make life as simple as possible. Because let’s face it -life is tough and it will be tough for Ryan too, just in different ways.
Emily Boyer lives with her husband, Geoff, and 3-year-old son, Logan, and infant son, Ryan, in Minnesota.