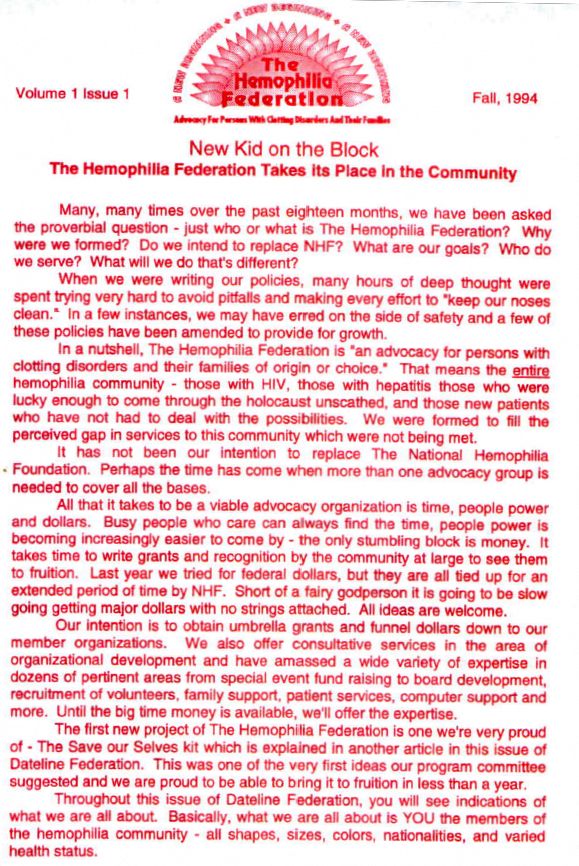 The early 1990â€™s marked a period of action in the hemophilia community.

In 1990, Ryan White died at the age of 18 and in 1992, Ricky Ray, one of three brothers infected with HIV/AIDS died at the age of 15. During this time, the hemophilia patient community began to independently ask their own questions and galvanize. Local hemophilia organizations, The Committee of Ten ThousandÂ (COTT), and others sought answers to why they were given misinformation and hold accountable those who failed to prevent the spread of HIV/AIDS to people with hemophilia. Litigation against the drug manufacturers dominate most of the 1990â€™s. Some patients filed individual cases, or are part of a large class action suit; others choose not to pursue a settlement

The Committee of Ten Thousand (COTT) and other organizations began to seek answers to why they were given misinformation and hold those accountable who failed to prevent the spread of HIV/AIDS to people with #hemophilia.

In 1993, the Hemophilia Federation of America (HFA) formed as a sub-group of COTT and became independent in 1994. HFA bridged the gap between the advocacy efforts of COTT, and became a place of education and support for families.

Today, HFA continues to assist, advocate, and serve as the voices of the bleeding disorders community. HFA’s programs like Blood Brotherhood, Blood Sisterhood, Dads in Action, MomsConnect, FitFactor, and Helping Hands are designed to help the community stay informed and supported.

Read our first newsletter from 1994.Â

Subtitle: The “Risk” Of A Recall Was “not Worth The Benefit,” The Former Foundation President Said.

Blood-clotting drugs so improved his life that their possible contamination with the AIDS virus in the early 1980s was “an irrelevancy,” according to Donald S. Goldman, a former president and board chairman of the National Hemophilia Foundation.

In a recent deposition, Goldman also said that the foundation’s co-medical director, Louis Aledort, told him in early 1983 that it was pointless to take any clotting concentrates tainted with the virus off the market – because it was likely that all of the products contained the virus.

Aledort, Goldman said, told him that “the risk of the increased cost and the decreased supply was not worth the benefit” of a recall, since the drugs were so essential to patients.

So in 1984, when clinical trials of a diagnostic test determined that most people with hemophilia carried antibodies for the AIDS virus, Goldman said that he and others at the foundation found this “reassuring.” It suggested, he said, “that people were already exposed, and having been exposed, they were immune.”

The statements of Goldman, a severe hemophiliac who now is a Superior Court judge in New Jersey, are contained in a pretrial deposition he gave in September as a witness in a class-action lawsuit filed by people with hemophilia who contracted the AIDS virus from blood-clotting medicine. 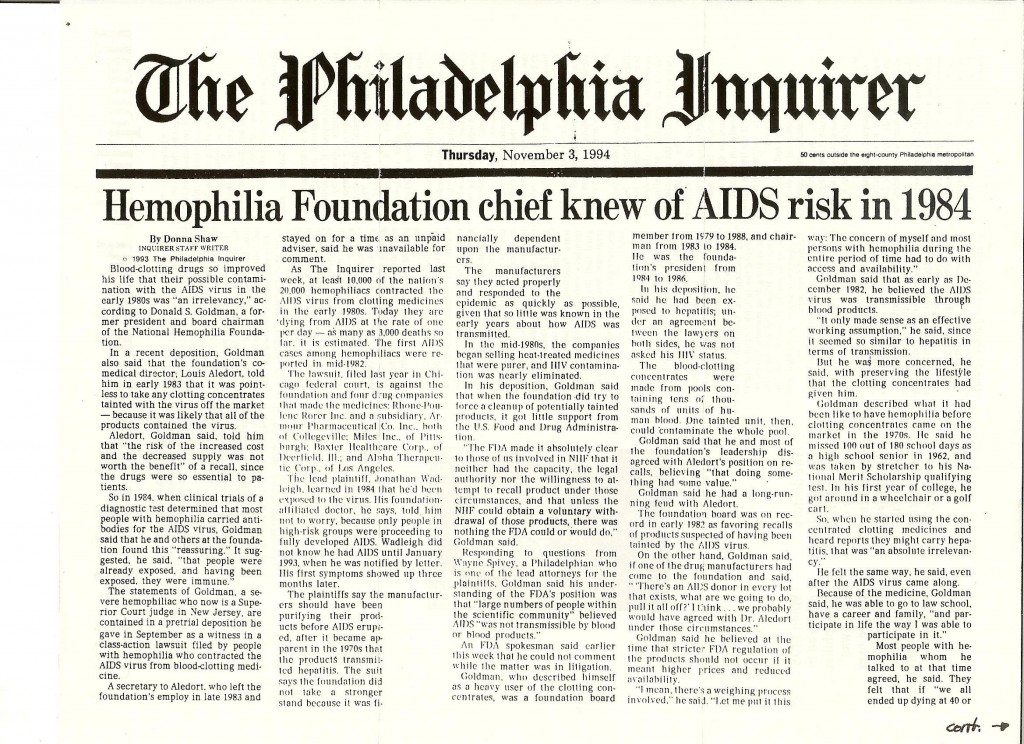 A secretary to Aledort, who left the foundation’s employ in late 1983 and stayed on for a time as an unpaid adviser, said he was unavailable for comment.

As The Inquirer reported last week, at least 10,000 of the nation’s 20,000 hemophiliacs contracted the AIDS virus from clotting medicines in the early 1980s. Today they are dying from AIDS at the rate of one per day – as many as 3,000 deaths so far, it is estimated. The first AIDS cases among hemophiliacs were reported in mid-1982.

The lawsuit, filed last year in Chicago federal court, is against the foundation and four drug companies that made the medicines: Rhone-Poulenc Rorer Inc. and a subsidiary, Armour Pharmaceutical Co. Inc., both of Collegeville; Miles Inc., of Pittsburgh; Baxter Healthcare Corp., of Deerfield, Ill.; and Alpha Therapeutic Corp., of Los Angeles.

The lead plaintiff, Jonathan Wadleigh, learned in 1984 that he’d been exposed to the virus. His foundation-affiliated doctor, he says, told him not to worry, because only people in high-risk groups were proceeding to fully developed AIDS. Wadleigh did not know he had AIDS until January 1993, when he was notified by letter. His first symptoms showed up three months later.

The plaintiffs say the manufacturers should have been purifying their products before AIDS erupted, after it became apparent in the 1970s that the products transmitted hepatitis. The suit says the foundation did not take a stronger stand because it was financially dependent upon the manufacturers.

The manufacturers say they acted properly and responded to the epidemic as quickly as possible, given that so little was known in the early years about how AIDS was transmitted.

In the mid-1980s, the companies began selling heat-treated medicines that were purer, and HIV contamination was nearly eliminated.

In his deposition, Goldman said that when the foundation did try to force a cleanup of potentially tainted products, it got little support from the U.S. Food and Drug Administration.

“The FDA made it absolutely clear to those of us involved in NHF that it neither had the capacity, the legal authority nor the willingness to attempt to recall product under those circumstances, and that unless the NHF could obtain a voluntary withdrawal of those products, there was nothing the FDA could or would do,” Goldman said.

Responding to questions from Wayne Spivey, a Philadelphian who is one of the lead attorneys for the plaintiffs, Goldman said his understanding of the FDA’s position was that “large numbers of people within the scientific community” believed AIDS “was not transmissible by blood or blood products.”

An FDA spokesman said earlier this week that he could not comment while the matter was in litigation.

In his deposition, he said he had been exposed to hepatitis; under an agreement between the lawyers on both sides, he was not asked his HIV status.

The blood-clotting concentrates were made from pools containing tens of thousands of units of human blood. One tainted unit, then, could contaminate the whole pool.

Goldman said that he and most of the foundation’s leadership disagreed with Aledort’s position on recalls, believing “that doing something had some value.”

Goldman said he had a long-running feud with Aledort.

The foundation board was on record in early 1982 as favoring recalls of products suspected of having been tainted by the AIDS virus.

On the other hand, Goldman said, if one of the drug manufacturers had come to the foundation and said, ” ‘There’s an AIDS donor in every lot that exists, what are we going to do, pull it all off?’ I think . . . we probably would have agreed with Dr. Aledort under those circumstances.”

Goldman said he believed at the time that stricter FDA regulation of the products should not occur if it meant higher prices and reduced availability.

“I mean, there’s a weighing process involved,” he said. “Let me put it this way: The concern of myself and most persons with hemophilia during the entire period of time had to do with access and availability.”

Goldman said that as early as December 1982, he believed the AIDS virus was transmissible through blood products.

“It only made sense as an effective working assumption,” he said, since it seemed so similar to hepatitis in terms of transmission.

But he was more concerned, he said, with preserving the lifestyle that the clotting concentrates had given him. 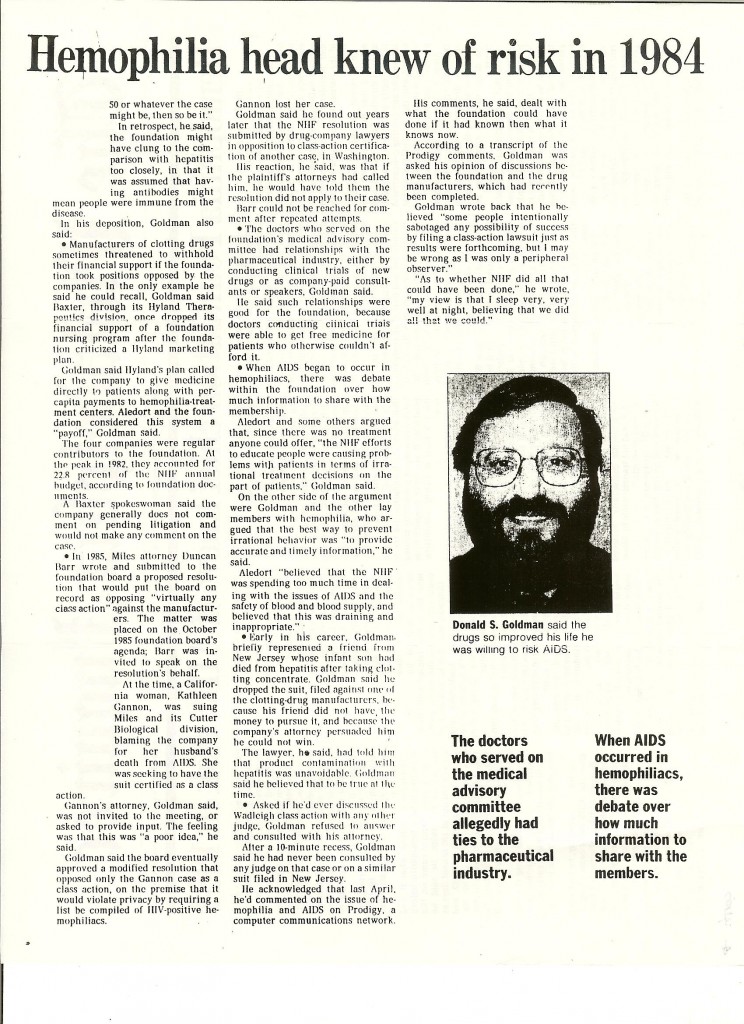 Goldman described what it had been like to have hemophilia before clotting concentrates came on the market in the 1970s. He said he missed 100 out of 180 school days as a high school senior in 1962, and was taken by stretcher to his National Merit Scholarship qualifying test. In his first year of college, he got around in a wheelchair or a golf cart.

So, when he started using the concentrated clotting medicines and heard reports they might carry hepatitis, that was “an absolute irrelevancy.”

He felt the same way, he said, even after the AIDS virus came along.

Most people with hemophilia whom he talked to at that time agreed, he said. They felt that if “we all ended up dying at 40 or 50 or whatever the case might be, then so be it.”

In retrospect, he said, the foundation might have clung to the comparison with hepatitis too closely, in that it was assumed that having antibodies might mean people were immune from the disease.

In his deposition, Goldman also said:

Goldman said Hyland’s plan called for the company to give medicine directly to patients along with per-capita payments to hemophilia-treatment centers. Aledort and the foundation considered this system a “payoff,” Goldman said.

The four companies were regular contributors to the foundation. At the peak in 1982, they accounted for 22.8 percent of the NHF annual budget, according to foundation documents.

A Baxter spokeswoman said the company generally does not comment on pending litigation and would not make any comment on the case.

At the time, a California woman, Kathleen Gannon, was suing Miles and its Cutter Biological division, blaming the company for her husband’s death from AIDS. She was seeking to have the suit certified as a class action.

Gannon’s attorney, Goldman said, was not invited to the meeting, or asked to provide input. The feeling was that this was “a poor idea,” he said.

Goldman said the board eventually approved a modified resolution that opposed only the Gannon case as a class action, on the premise that it would violate privacy by requiring a list be compiled of HIV-positive hemophiliacs.

Goldman said he found out years later that the NHF resolution was submitted by drug-company lawyers in opposition to class-action certification of another case, in Washington.

His reaction, he said, was that if the plaintiff’s attorneys had called him, he would have told them the resolution did not apply to their case.

Barr could not be reached for comment after repeated attempts.

He said such relationships were good for the foundation, because doctors conducting clinical trials were able to get free medicine for patients who otherwise couldn’t afford it.

Aledort and some others argued that, since there was no treatment anyone could offer, “the NHF efforts to educate people were causing problems with patients in terms of irrational treatment decisions on the part of patients,” Goldman said.

On the other side of the argument were Goldman and the other lay members with hemophilia, who argued that the best way to prevent irrational behavior was “to provide accurate and timely information,” he said.

Aledort “believed that the NHF was spending too much time in dealing with the issues of AIDS and the safety of blood and blood supply, and believed that this was draining and inappropriate.”

The lawyer, he said, had told him that product contamination with hepatitis was unavoidable. Goldman said he believed that to be true at the time.

After a 10-minute recess, Goldman said he had never been consulted by any judge on that case or on a similar suit filed in New Jersey.

He acknowledged that last April, he’d commented on the issue of hemophilia and AIDS on Prodigy, a computer communications network.

His comments, he said, dealt with what the foundation could have done if it had known then what it knows now.

According to a transcript of the Prodigy comments, Goldman was asked his opinion of discussions between the foundation and the drug manufacturers, which had recently been completed.

Goldman wrote back that he believed “some people intentionally sabotaged any possibility of success by filing a class-action lawsuit just as results were forthcoming, but I may be wrong as I was only a peripheral observer.”

“As to whether NHF did all that could have been done,” he wrote, “my view is that I sleep very, very well at night, believing that we did all that we could.”